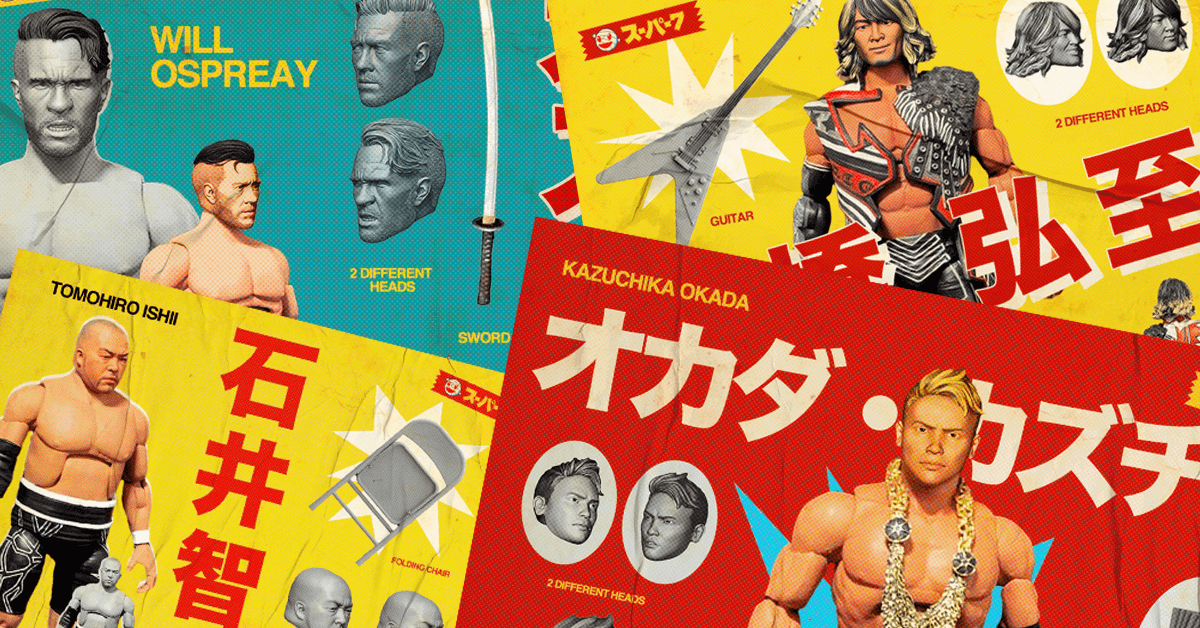 Well we just took a chair to the back of the head with the announcement that Super7 are tag-teaming up with New Japan Pro Wrestling to bring you FOUR of the hottest ultimate figures in NJPW! These 7inch figures of Okada, Ospreay, Tanahashi and Ishii will be available MADE-TO-ORDER as part of a special pre-order during November! Running from 1st through 30th November, you’ll be able to pre-order your fav NJPW wrestlers from Super7. No details on price at the time of writing, but we are guessing around $45 each. These will be available from https://preorder.super7store.com on Friday!

Kazuchika Okada has more than enough money to last him a lifetime, but money can’t buy respect and it certainly can’t buy the IWGP Heavyweight Championship. He had to earn that on his own and, 5 title reigns later, he’s done just that. Since assuming leadership of Chaos, The Rainmaker has taken the group to new heights and continues to make it rain money and championship gold. Okada will come with:

Look to the skies and that’s where you’ll find Will Ospreay! A 3x IWGP Jr Heavyweight Champion and the youngest wrestler to win the Best of the Super Jr Tournament, now a 2x holder of that accolade, the Aerial Assassin’s career has certainly been elevated. One of the most innovative wrestlers in the world today, moves like the Hidden Blade and the devastating OsCutter have made him an invaluable member of Chaos. Ospreay will come with:

Many have claimed to be the best wrestler in the world, but no one can lay claim to being the Ace Of The Universe. Unless you’re Hiroshi Tanahashi! A record 8x IWGP Heavyweight Champion, Tanahashi has proven himself to be a big match star time and time again. No matter how intense a fight, the Ace always manages to get in a scintillating air guitar performance with every victory! Go Ace! Tanahashi will come with:

Few wrestlers come as tough as Tomihiro Ishii. His intensity in the ring has led him to multiple championships including the NEVER Openweight Championship. A no-nonsense wrestler, the Stone Pitbull has claimed many a victory thanks to his devastating brainbuster suplex. As a member of Chaos, Ishii’s stock in NJPW continues to rise. Ishii will come with: