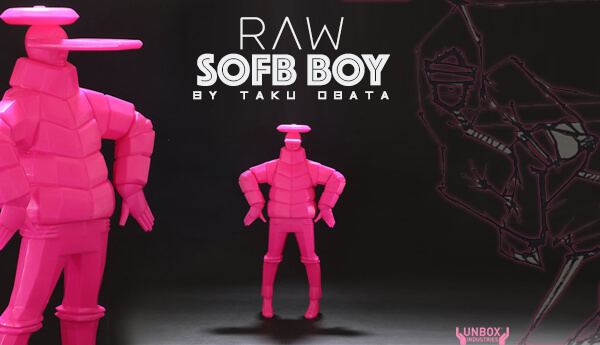 Prepare to wipe those tears as the last RAW edition is set to be released this weekend. Like we said previously, one project has had our eyes glued to the screen since 2017 was the SOFB BOY by Taku Obata powered by Unbox Industries! SOFB BOY BBOY by the one and only Taku Obata vinyl toy was released in various editions. From wood to vinyl. Powered by Unbox Industries the project has now been fully approved and released. We are glad Unbox is making this reality as we’ve been fans of Taku Obata art and obviously this version will be a more affordable way of owning Taku Obata art. As Kano puts it putting “Make Vinyl Urban Again” Ha. Fast forward to the present day and Taku Obata & Unbox will be giving you the chance to own one of the super limited versions of SOFB BOY RAW EDITION V.3 this weekend! Time to get those trigger fingers ready as the purple RAW EDITION sold out in minutes if not seconds!

SOFB BOY is a soft vinyl interpretation of an original wooden sculpture by Obata that was digitally scanned for a “Virtual” museum project with ANA in 2016.

Unbox was allowed to use the data to produce an exact soft vinyl interpretation of the sculpture that translates the craftsmanship of Obata’s original into a new exciting form that allows pose ability and dynamism in the hands of the owner.

Born in 1980 in Saitama, Japan, where he is currently based. Taku Obata has drawn upon one of the vital elements of Hip Hop culture and channelled it into truly breathtaking figural art that captures the energy and raw power of the B-Boy.
As part of his crew Unity selections or via his incredible wood carving, Obata has successfully intertwined Hip Hop into his career with breathtaking results.