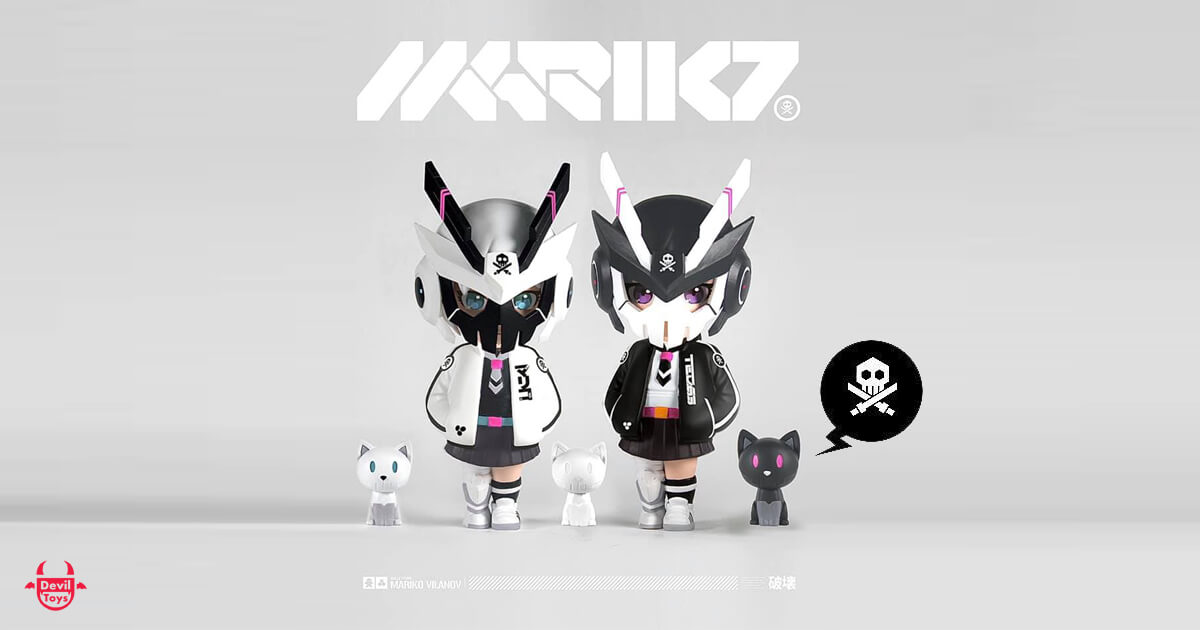 As promised yesterday, Quiccs x Devil Toys release the pre-order details! The next chapter begins! Late last year when the future was bright, QUICCS showed the early prototype of Mariko. Fast forward to the present day, It looks like Devil Toys has finished the prototype and ready to unleash the new era of The Bulletpunk™ Network with Mariko this week! But wait, Mariko’s cat sidekick Necco will be alongside her for the ultimate protection. Today not only do we get the pre-order details, but we also get to see the full turnaround of the black and white Mariko and Necco.

The TTC Shop will stock both the OG Black and Ghost White edition of MARIKO! Priced at £78 + s&h. You can also purchase a set of both colourways for £145! Both available now. Click the button below to take you to the TTC Shop!

-as a 13 year old girl, barely survives an attack from robot guardians that destroy their town – whole family is killed – she is able to be saved by TEQ63, but is badly wounded, loses her right leg, left arm – she is relocated in another tribe, where she survives her injusries and is given robotic arms and legs – she vows to serve TEQ63 when she grows up, as her thanks for being saved and in order to avenge her family – disgusies herself as a man in order to be trained hard as a solider – as a 19 year old woman, becomes one of the best soldiers in her tribe – swordsman and gun specialist, upgrader her robotic parts to become even more lethal (with her new upgraded leg, she cannot wear pants anymore, so is one day revealed to be a woman in one of their battles against the robotic guardians Realizing she has fellen in love with TEQ after seeing how he has fought bravely in battles all those years she was growing up, and how much people TEQ63 and team have saved – One day saves TEQ63 in one of his battles, becomes the new recruit to his super team – She tells TEQ63 who she is, and professes her love – TEQ63 is reluctant to reciprocate her feelings

HER turn! The Mariko First Edition Vinyl Toys are finally here! Teamed up with Devil Toys to bring you guys the very first incarnation of Mariko in OG Black and Ghost White Editions!
—
Each Mariko (5.2 Inches with mask) comes with her sidekick mecha cat Necco (1.5 Inches) The Mariko+Necco pack is priced at 78 USD, but just for this Preorder Event, They have built a sweet special combo pack that features an additional DIY Necco cat when you buy both colorways for 156 USD! Global Shipping is FREE!
—
The Preorder Event Starts at 11AM EST / 8AM PT / 11PM MNL/HK / 5AM Hawaii and will run for two weeks! EST Delivery is MAY 2020!