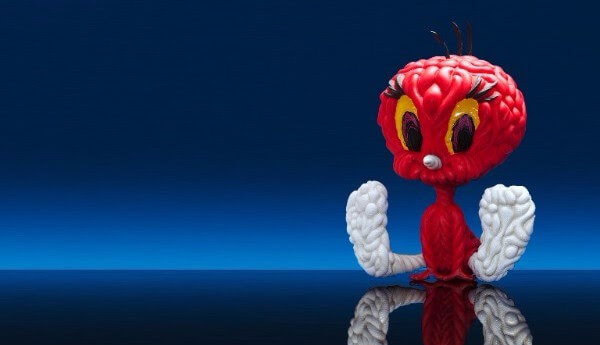 Friday and Kidrobot drop a bomb on us over at TTC. The highly teased Mark Dean Veca x Kidrbot re-imaged Tweety pie just got released today on their own webstore.  This is what we like to see, licensed designer toys in a re-imagend. It won’t be everyone’s cup of tea but what designer toy is? We dig it and no disrespect to Mark Dean Veca it would be a great platform for customerisers to work their magic. “Since their riotous debut, the Looney Tunes have unleashed a cavalcade of delight upon an unsuspecting world and have been a timeless cartoon staple ever since. Kidrobot is proud to present a full cast of your favorite wacky heroes from Bugs Bunny to Pepe LePew for your collecting pleasure,” said Frank Kozik, Creative Director of Kidrobot, on the creation of the Looney Tunes collection.” Red Yellow and Black seems like the different colourways you can choose and priced at $75 each at http://www.kidrobot.com/. We have no photos of the yellow and black versions, but as soon as we do we will up date you all. (all info and photos lifted from http://www.kidrobot.com/)