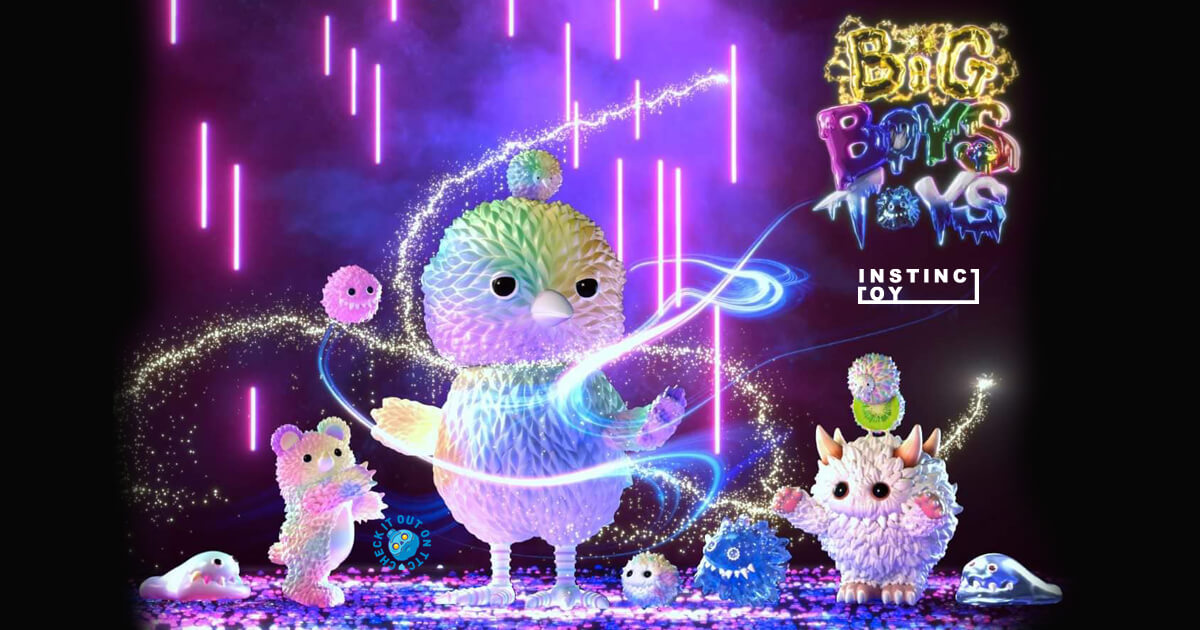 The collaboration between BIG BOYS TOYS x INSTINCTOY was officially announced a good couple of weeks back with INSTINCTOY showcasing the official BBT Party banner artwork. With the convention just days away, a few weeks back Instinctoy presented the world with “KIWI” one of the first collaborations with BIG BOYS TOYS and will be made available to pre-order at the event. You won’t find any KIWI’s as vibrant as this one! INSTINCTOY prototype photos look very promising and we can’t wait to see them in hand.

I was in charge of the main visual for the art toy section this time. At the same time, I designed an original character for the event. BBT is an event that originated in New Zealand, and the motif is the “KIWI” bird, the national bird of New Zealand. When designing the KIWI character I focused especially on the appearance of its „feathers“. When working on the 3D model, the challenge was to express the characteristic way the feathers look. They had to appear fluffy and soft with mesh highlights looking like needles at first glance. Therefore, during modelling, I made each feather a simple two-sided rhombus and arranged it according to the flow of the feathers to make each look like a highlighted line. In addition, “light and shade” produce “colour” in this form. Please make sure to pay attention to the formative expression that makes the colouring more vivid by adding a halftone of shadow to the vivid gradient colour. The “

” on the posterior was incorporated into the design as the BBT symbol mark. KIWI’s sidekick WIKI has a more kiwi bird-like design. KIWI’s back and WIKI’s posterior are each infested by INSTINCTOY’s signature character, an “EROSION MONSTER”, making those characters an original collaboration between BBT x INSTINCTOY. This work will be made as a figure and will be offered for pre-order as a limited-edition item at the venue.

The large-scale complex cultural event which originated in New Zealand, with sports/games/art toys/comics/cars/travel as the focus. This time, INSTINCTOY is responsible for the main visual effects of the “ART TOY” section. At the request of the organizer, we asked to use the main visual effects of INSTINCTOY’s original characters. Therefore, as a “graphic artist”, we completed the design by arranging three-dimensional works with 3D images. This large-scale event which was originally scheduled to happen next year will be held as an exhibition in Shanghai from October 5th to 7th this year on a smaller scale. INSTINCTOY will also have a booth with products on offer! We are still preparing products that can only be purchased at the venue, so we hope you can come and visit us.- 大久保博人 Instinctoy.

(all info and images lifted from https://www.instinctoy.blog )