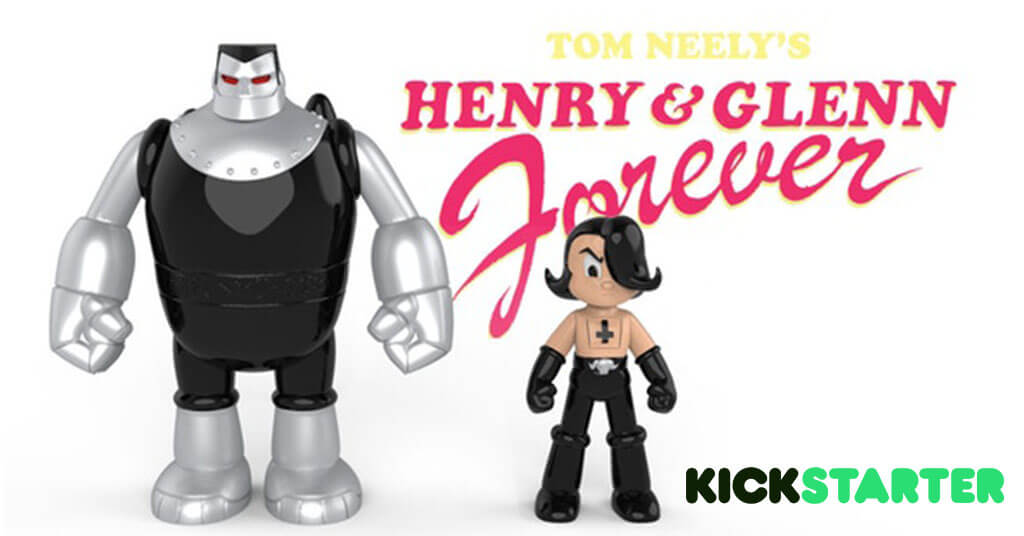 Rocom is a well established talented illustrator, artist, rapper, producer and male model (okay, maybe not a profissional one, but he could if he would). He’s been on the toy industry for nearly 10 years, working on projects for some major brands like Star Wars and Spider-Man. He created of one of the most exciting projects last year, the ‘Death Jaguar’ (read HERE) and now he’s back with a new venture.

Partnering up with Tom Neely and based on a comic of his own creation, ROCOM created two awesome vinyl figures, Henry and Glenn! Based on what we’ve seen so far we can tell you that the did it again. These will for sure be a success and you better get on board.

Tom Neely(IG: @iwilldestroytom) and a few friends created a small ‘Zine back in 2006. Those quickly turned into a 66 page collection of comics that were published in 2009. The premise of the comic is explained in the beginning: “Henry and Glenn are very good ‘friends.’ They are also ‘room mates.’ Daryl and John live next door. They are satanists.” What follows is made up of ultra-metal violence, cryfest diary entries, cringing self-doubt, and mega-hilarious emo-meltdowns. Who knew Glenn was such a vulnerable, self-conscious sweetie-pie? Who knew Henry was such a caring spouse? It’s hardcore. It’s hilarious. It’s a true testament to the power of love to overcome even the biggest, manliest egos of our time.

2018 marked the creation of Rocom Toys(IG: @rocom) with its debut soft vinyl robot, Death Jaguar. After a successful Kickstarter and hundreds of toys sold, Rocom set out to plan his next toy release. After some talks with Tom Neely, the idea of Japanese Robot renditions of Henry & Glenn became an instant obsession. Tom quickly started brainstorming concept sketches and within just days, Kotetsu Henry-138 and Astro Glenn were born.

The sculpts for these toys were made meticulously to stay true to Tom’s initial sketches and also reflect the 1960s anime they’re inspired from. They’re truly an embodiment of punk rock and the anime they pay homage to.

The Henry vinyl toy stands at 9″ tall and has 5 points of articulation. It will come with swap-out fists and open hands as well as a wearable Battle Helmet.

The Glenn vinyl toy stands at 5.75″ tall and has 3 points of articulation. Designed by Tom Neely and sculpted by Stephan Ehl from Paper Mechanic.

Run now to the original Kickstarter page HERE and find out all about the project and stretch goals!