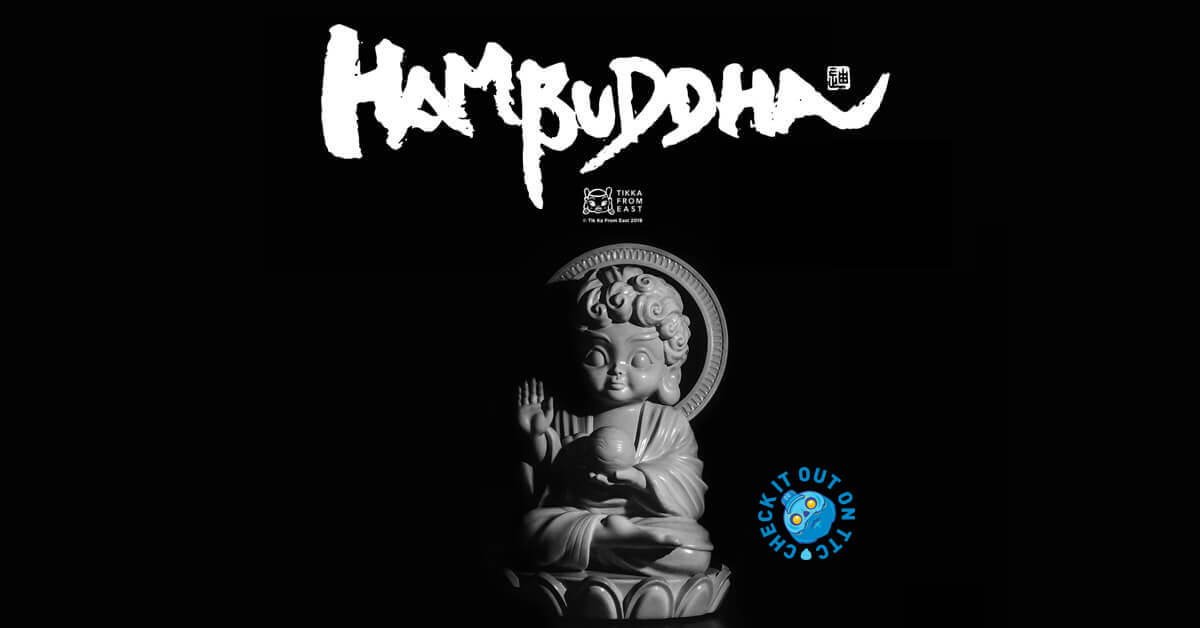 Over three years ago, Hong Kong’s very own Tik Ka from the East blessed our souls with HAMBUDDHA. TIK KA FROM EAST powered by Mighty Jaxx, the Hong Kong based artist Tik Ka From East joined the Mighty Jaxx roster a few years back! Influenced by both Eastern and Western cultures, Tik Ka from East’s works marries Oriental aesthetics with European, American and Japanese popular cultures, Hambuddha was erected! Over the years we have seen different variants and over the weekend a Hambuddha Grey Edition was spotted at K11 mall as a part of the Might Jaxx display at K11, the first Museum Retail in the World.

“Eat them burgers, for fast food is the fastest path to the Pure Land” – Hambuddha

From the brilliant mind of Hong Kong artist Tik Ka From East, comes Hambuddha, originating from his “Eat Good West” painting series. This concept came from the artist’s idea that fast food is responsible for speeding up our journey to Sukhāvatī, the Pure Land, which is the place that we go to after we pass away.

Hambuddha may look like a regular Buddha sculpture from the back, with a halo around his head, but turn him around and you’ll be surprised! He wears clown-like makeup and has bright red hair, reminding us of a famous fast-food mascot. He holds a pearl-shaped hamburger in his hand and sits in a single lotus position on a deliciously golden-brown lotus throne.

K11 is the catalyst for a community revitalisation like no other. It is a unique shopping and dining destination which bring Art•People•Nature together in harmony.K11 art playground – the magical, creative place where art brings together culture, entertainment, shopping and living- K11

Right now we have no idea if this Hambuddha Grey Edition is up for grabs but you can contact K11 or visit the display at 18 Hanoi Road, Tsim Sha Tsui, Kowloon, Hong Kong wingleun Tsim Sha Tsui, Hong Kong. Could this be a mini-series prototype? Stay tuned for further updates. *UPDATE, This Grey edition is a PROTOTYPE VERSION and NOT FOR SALE.

While we have your attention have you seen Tikka art? your chance to own prints and limited edition vinyl pieces via his STORE! below is a little teaser.

【TikKa from East】Growing up in the Hong Kong colonial era, Tik Ka absorbed European, American & Japanese cultures including comic books, movies, music and food culture, whilst, at the same time, having a traditional Chinese background. With such a culture mixed background, Tik Ka has created his Pop-Art Creation called “Tik Ka From East” – all works and series are painted in the style of ancient Chinese art with a special culture blend. One of his inspired series – “Super Hero meet Chinese Opera”-  was highly acclaimed by international media and personal including Stan Lee (Marvel Chairman & Director) and Robert Downey Jr.

【Chizi by  Tik Ka】 – Tik Ka’s early work infused the Japanese “Kawaii” style into traditional Chinese new year paintings – creating the “So Ha” (infant) series. The subject and tone illustrate a colourful, artless utopia as a way to explore humanity through the eyes of a child. Continuing to explore his boundaries, Tik Ka incorporated Chinese and Western influences and aesthetics, developing the series “ChiZi”. The dreamy, soft colours used in “ChiZi” – its subtle, muted tones contrast with the vibrant and luxuriant “So Ha” series. It is Tik Ka’s hope to share with the world “ChiZi’s” innocence, and undamaged essence of humanity.