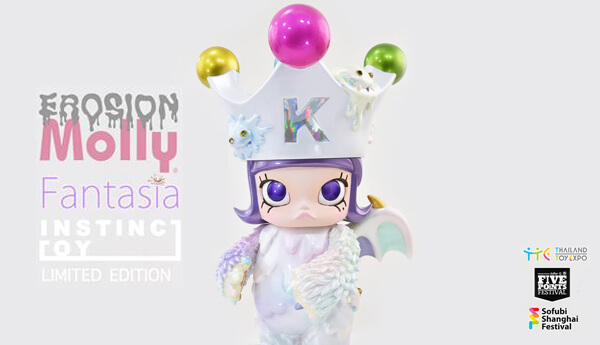 Hot off the press! It has been no secret that two big giants of Asia Kenny Wong and INSTINCTOY are joining forces to release soft vinyl toys. Today INSTINCTOY have revealed EROSION MOLLY Fantasia! She’s a beauty, mixing both artist signature styles into one.

The ?EROSION MOLLY? is a collaborative work by Kennyswork × INSTINCTOY. This project was put together by the Monster Taipei Taiwan store. The second color is named ?Fantasia? which is a limited edition production by INSTINCTOY. It will be released in the following toy shows: Thailand TTE, New York FIVE POINTS FESTIVAL and Shanghai SSF.

After the toy shows, it will be released on http://www.instinctoy.com/ via a lottery draw. Further info tofollow?Figure Size: 240mm?