Martial arts has long had its influence in Hip Hop culture.  This year’s ComplexCon unveiled a limited quantity of kaNO’s tribute to Bruce Lee, his Dragon King toy, this time in collaboration with Cultural Ambassador and creator of Compound, Set Free, and Compound Strategic partner, Carmelo Anthony. Powered by ToyQube, the official release of the Compound x Carmelo Anthony edition ‘Dragon King’ set to make its online release this weekend. Your chance to own Dragon King at retail price and give a one-inch punch to the flippers! Officially licensed and approved by the Bruce Lee estate, the Compound edition ‘Dragon King’ set will feature the toy in Compound’s official Black/Platinum and Black/Gold colourways. The glossed and matte detailed 20” vinyl sculpture will also don the number ‘7’, Compound and Anthony’s signature number.

The ‘Dragon King’ collectable is the first of many art projects, to kick off Compound’s strategic partnership with NBA All Star and art collector, Carmelo Anthony.  Set Free, who is critically acclaimed for creating the AND1 Mixtapes, has a knack for being ahead of the curve when it comes to creating. It wasn’t long before his love of toys and collecting catapulted him into being one of the first among urban culture to create his own. The Compound x Carmelo Anthony edition Dragon King is his first set to be released with ToyQube after 3 successful toy releases in collaboration with contemporary artist Ron English and Made by Monsters manufacturing company.

From New York to California, kaNO has amassed a wide array of creativity since an early age. Broadening his skills across the big screens and in cartoons, kaNO has designed with Hasbro, Disney, and Warner Bros., and utilized graffiti art and toy making as a fine art over the years. He collaborated with ToyQube to take on an urban stylized version of the Kung Fu legend. Established in 2004, ToyQube is an art production company producing various designer toys fitting of urban culture and lifestyle. ToyQube expanded their brand to next level sculpture collaborations with world renowned artists.

A limited 7 sets were released and sold out at ComplexCon in Long Beach, CA on November 3 and 4th at $400USD. On Friday, November 30, Compound will drop the final 286 pieces, amounting to 300 in total, online only. 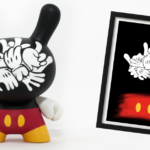 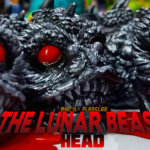