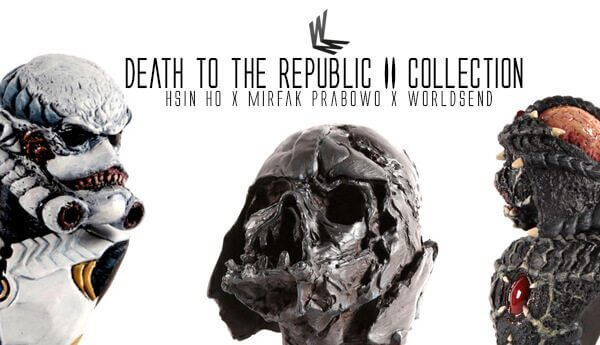 Remember back in Feb 2016 KILAS AKA Zahir Sanosi released a Totoro figure with the guys at Worldsend? They are back and this time quite fittingly homing in on the May 4th Star Wars day with life-size Vader melted mask sculpture from Taiwanese artists Hsin Ho called ‘Legacy’. If thats not enough Mirfak from Indonesia titled ‘Stormeater’ and ‘Death Vader’ will be sold via Worlsend.

“I have been a star wars fan since I was 8 years old, after all these years of waiting, I was really excited to watch The Force Awakens movie on the big screen. When I first saw the melted Vader helmet, I was emotional. I had to sculpt it immediately, I don’t know what is it about the melted helmet that it makes me feel serene, I guess we all have a little bit Vader inside of us.”

Hsin Ho is a Taiwan based artist, raised by videogames, western Sci-Fi movies and Japanese manga.

He is a sculptor who works in the modern art industry, through his artistic perspective, he wants to tell the world, that geek culture is not only a lifestyle but a sacred religion.

My sculptures are based on two iconic characters in the Star Wars universe, Darth Vader and Stormtrooper.The idea was, what if not one single human exist in the Star Wars universe? That every single living thing would take the form of an alien. Based on that premise, I imagined Death Vader & Storm Eater would be in a much more terrifying form. Even more so, the mask and armor suit weren’t just a mere gear to cover their whole body, but actually is part of their bodies. The whole form is more organic because it’s made of their own flesh and blood.

He studied painting at Bandung Institute of Technology, Faculty of Fine Art & Design graduating in 2012. He is currently living in Bandung as a full-time artist and a miniature sculptor, he also plays bass in the rock band called Sigmun.

Buy them all at www.worldsend.co NOW.
We hope to see more from Hsin Ho x Mirfak Prabowo, but more of their own characters as we can tell their sculpting work is pretty cool. See what their imagination can give to this art toy community.
Look out for Kilas’ Bobaphet toy will be dropping later this month.
You can read more information at www.worldsend.co and www.v-lla-ns.com
About World’s End
“We are a purveyor of fine art and design products that will destroy your

mind and corrupt your soul with desire. Each collection is curated with the agenda of showcasing new exquisite talent from East and West. From rare commissioned original artworks to highly exclusive one-off comic series, we intend to impose unique product

offerings that are both highly desirable to have as well as highly engaging to create.