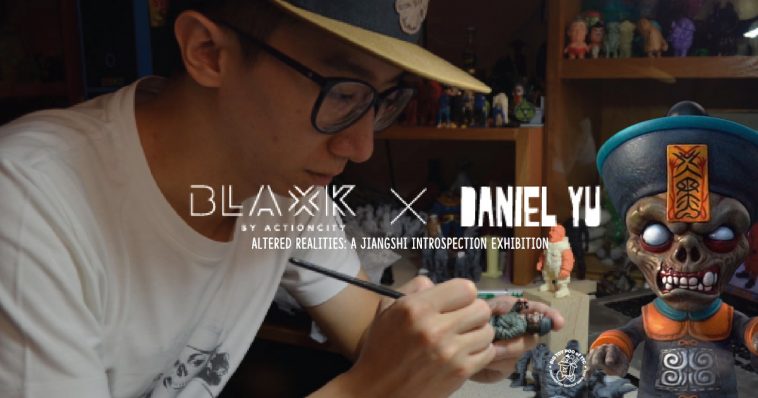 As the hours tick away, Singapore’s very own heartthrob and resin slinger of the designer toy scene, Daniel Yu is all set to take centre stage at BLAXK! the red carpet ironed and display of Daniel’s designer toys in full glory along with a range of local artists to Pay tribute to Daniel Yu’s “Jiangsh” with over 13 Singapore using it as a canvas!

As the space for pop culture, art and collectables, BLAXK by ActionCity (BLAXK) is proud to present Altered Realities: A Jiangshi Introspection exhibition curated by the immensely-talented Daniel Yu! Set as one of the original local names in the collectables scene, Daniel Yu is a sculptor
working primarily with clay and resin. Heavily influenced by an upbringing steeped
in local tradition and pop culture ephemera; his works combine both worlds of
imagination yet remain largely shaped by his personal experiences.

Best represented by his macabre-themed characters, including his iconic Jiangshi creations, Daniel’s
toy releases see a cult following in the urban and subculture art scene.
Paying tribute to the Jiangshi together with 13 other key local artists, Daniel celebrates
this macabre form as an artistic muse and inspiration — elevating the classic folklore
character into a pop culture icon through showcasing various creative reimaginations
of the Jiangshi at BLAXK.

Various Kaiju monsters including King Kong and Godzilla, as well as creatures like
Aliens, Chupacabras, Frankenstein monster, Werewolves, Zombies and of course
Jiangshi — all monsters steeped in various cultures — have gained popularity as
modern-day pop icons, inspiring artworks and collectables alike. The macabre theme
has seeped into various artforms, celebrating the various narratives and visual
imaginations stirred up by these folklores.

The Jiangshi — strongly rooted in modern cultural consciousness by classic Hong
Kong horror movies from the 70s to 90s — are undoubtedly one of the quintessential
Asian troupes familiar to Singaporeans. More than just a cinematic genre, Jiangshi has
grabbed pop culture consciousness as current generations who grew up immersed in
this folklore mythology now seeks the creative revival of the iconic horror trope.

Inspired to create his own toys after being influenced by folklores and characters
from his formative years, Daniel Yu started on his art journey through two artist
apprenticeships — one with the National Arts Council (NAC), and one with local artist
collective PHUNK. These mentorships played a big part in getting himself immersed
in the local creative scene, subsequently winning the NOISE artist of the year award,
an initiative by NAC, giving him the courage to dive head first into becoming a
full-fledged maker and creator.
Since then, Daniel grew a large collector base for his art figures including various
ubiquitous characters to him such as Bird Shaman, Lunar Beast, Mumbles, Terror-cotta
and Zuco Banana. Jiangshi remains one of his strongest muse, as his Jiangshi Acolyte
figures become his defining work and highly sought after by collectors and macabre
aficionados alike.

Through Daniel’s eyes, this Altered Realities: A Jiangshi Introspection exhibition creates
an art world of alternative interpretations of our quintessential Asian horror trope —
the Jiangshi, through his showcase of more than 120 Jiangshi creations and other
macabre-themed collectables produced during his art career.

“I strive to create work that is both visually engaging and has some form of cultural
relevance to me. The Jiangshi Acolyte is a result of both my Eastern and Western
influences. It adopts traditional Chinese iconography and also draws from the Western
concept of zombies. Additionally, some of my favourite things to sculpt are organic-looking textures. With zombie skin, there are no limits to the sorts of interesting pits and pustules you can add. Plus, no one can tell you that you sculpted zombie skin wrong.”

Designed exclusively for this exhibition at BLAXK by Daniel Yu, with only 100 pieces in
production, the BLAXK x Daniel Yu Jiangshi Junior (僵尸屁孩) is casted in high-quality
vinyl, and boasts 7 points of articulation (head, arms, hands and legs), with regular
joints (not magnets). Recreate your favourite Jiangshi poses with this exclusive figure,
or try out new poses that show off your Jiangshi in a new light!

For the folks who can’t make it, theres no need to cry you can get them here at pre-order-jiangshi-junior-by-actioncity-x-daniel-yu

Focusing on Jiangshi as the pop culture art form rather than its gory cinematic history,
this exciting exhibition showcases participating artists’ inspired take on Jiangshi —
from whimsical paintings and trippy artworks to downright quirky installations!
Cheong Zhaoyong, Group Brand Director, ActionCity said, “As the melting pot of
interactions between artists and collectors, BLAXK by ActionCity is the catalyst for
local creative talents and new art genres. Presented by BLAXK and curated by our
homegrown maestro of macabre Daniel Yu, Altered Realities: A Jiangshi Introspection
allows us to examine the enthralling multi-faceted wonders of Jiangshi beyond the
deeply-established cinematic and cultural narrative that we are already so familiar with.
Given the collective fascination with Jiangshi, we are also honoured to be able to
excite and involve 13 other local key artists to create thought-provoking artworks
with Daniel’s Jiangshi as their muse. Indeed, through the creative lens of Daniel
and these participating artists, BLAXK is able to present a pop culture world where
art meets macabre!”

WHEN: Altered Realities: A Jiangshi Introspection will be open to the public at BLAXK by
ActionCity from Saturday, 24 September 2022 to Sunday, 20 November 2022.

About Daniel Yu
Daniel Yu (b.1985) is a Singaporean sculptor who works primarily in the medium of clay
and resin. Heavily influenced by an upbringing steeped in local tradition, as well as
pop culture ephemera; his works combine both worlds of imagination. Daniel’s works
offer a means of escapism from the real world, yet remain largely shaped by his
personal experiences. His fictitious characters see a cult following amongst the urban
and subculture art scene in both Singapore and abroad.

About BLAXK by ActionCity
BLAXK by ActionCity (BLAXK) is a space for all things pop culture, design and art.
Set up by ActionCity in September 2021, BLAXK marks the 21st anniversary and
growth milestone of the brand as the industry thought-leader spearheading the
convergence of pop culture, art and collectibles in Singapore.
Beyond curating pop art collections through partnerships with world-class artists &
brands, BLAXK inspires meaningful and deep connections between all who share a
common love for pop art and collectibles through serving as a creative and interactive
hub celebrating the vibrant growth of pop culture and community. 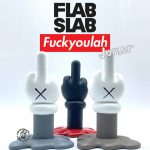 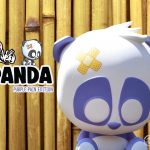