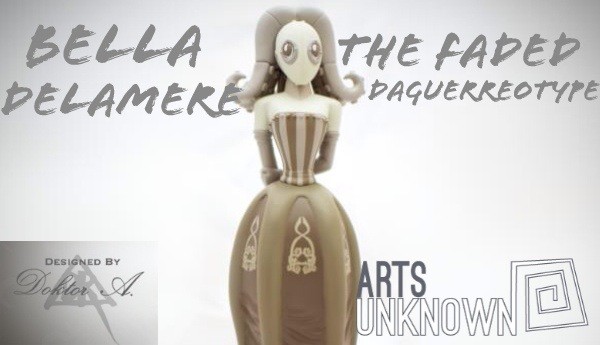 When I saw this post on Doktor A’s Facebook page, I knew something good was about to happen!

Now, thanks to the announcement from Arts Unknown we know that there is a new colour way of Bella Delamere. Discarded with the sump oil at a very early age, Bella was swept downstream until she found herself by the sea. She soon made friends with all forms of aquatic creatures and was taken in and raised by a family of Kraken (the smaller lesser spotted variety). Upon reaching adulthood she returned to the surface and emerged into society, remodelled after her adoptive kin folk. The tentacles do not raise many comments around town. But her insistence on always waring a mask certainly does. Much speculation is whispered about her true identity. And one day she will reveal her secret to the father who left her for dead… This “The Faded Daguerreotype” colorway is limited to 175 pieces are available right now over on the Arts Uknown store for £65 plus P+P.

Also I would guess that, as Dok has received some then there will be some APs for sale, but we will keep you posted on that one.