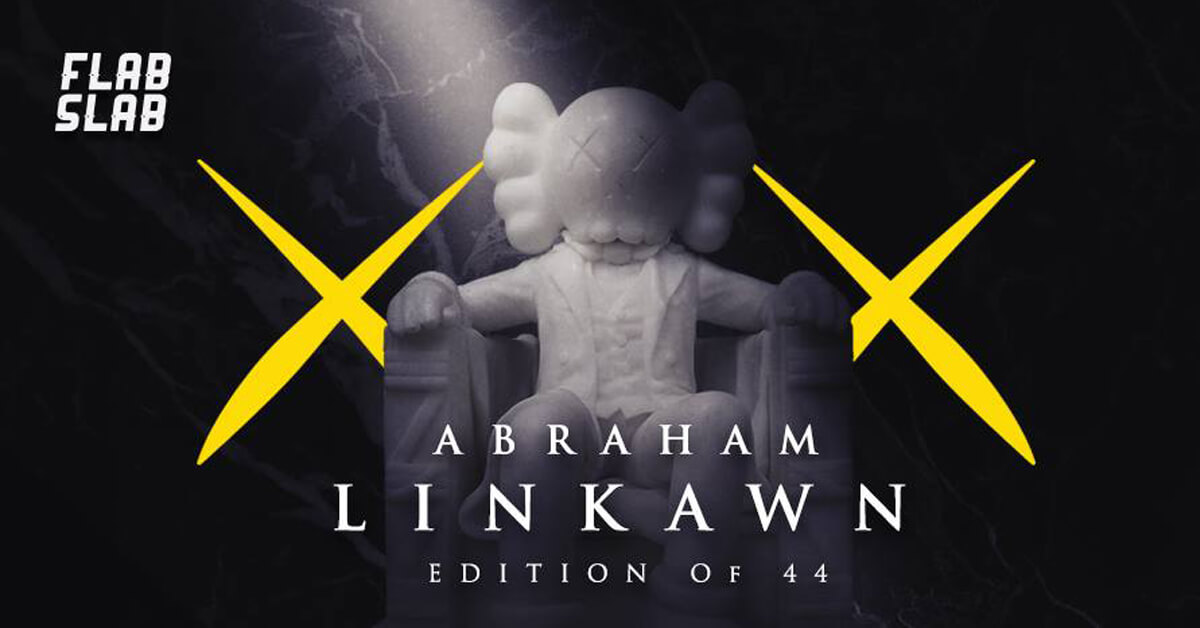 Abraham Linkawn by FLABSLAB is nearly here! After months being featured back December 2017 HERE. Progress has been made to the LINCOLN resin statue and the marble effect has taken shape and ready for a release, not a pre-order a straight up drop. Like we said before, an ICONIC homage to the great Abraham Lincoln or the OE KAWS fans whichever way you want to take it. FLABSLAB poking fun at the near replica of the real colossal seated figure of U.S. President Abraham Lincoln sculpted by Daniel Chester French and carved by the Piccirilli Brothers. This LINCOLN statue is the biggest release from FLABSLAB to date, KAWSfuckbois ready to bow down the mighty LINCOLN? This release, FLABSLAB have gone the whole nine yards as it comes with an individually numbered aluminium box, cray cray, fancy bastards.

** This is a fake. A real fake in case anyone is still wondering. Item is on hand and ready to be shipped. **

Doing what we do best. MAGA!!! Make Assholes Great Again.

Inspired by hypebeasts and the original sculpture by Daniel Chester French, we have Linkawn sitting pretty and looking at assholes doing burning and destroying the world.- FLABSLAB The marble fooled us! it’s actually cast in solid resin and hand painted to look like it’s a century old marble. Why Edition of 44? Chinese traditionally believe that ‘4’ is an unlucky number and it sounds like death when spoken in Mandarin and some dialects. Many tend to avoid it like a plague. So there you have it. Double plague!

Why USD555? According to wiki, “The Thai version of lol in a text conversation. “5” in Thai is pronounced “ha”, so three of them would be “hahaha.” “5” in Mandarin Chinese is pronounced “wu” so three together would be “wuwuwu”, which sounds somewhat like sobbing.”- FLABSLAB 10.5in tall a lord knows how wide or heavy Lincoln is you’d better make some space as it should be ready very soon! Hypbeasts are you ready for your President.

“I Walk Slowly, But I Never Walk Backward”- Abraham Lincoln