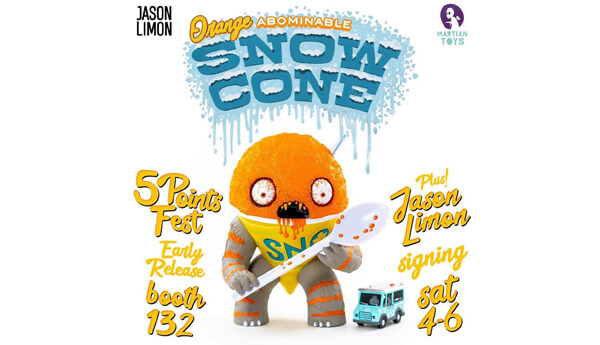 Oh boy! It’s BACK with a vengeance! Possibly one of the most limited colourways, Abominable Snow Cone ORANGE by Jason Limon x Martian Toys ready to takeover Five Points Festival this weekend. We have a brain freeze looking at him, HA.

2015 is where it all started! Rumours have been circulating for the past year of the return of the “Abominable Snowcone” by Jason Limon x Martian Toys! Making collectors wipe their tears away if they missed out on Abominable Snowcone OG’s. At ToyCon UK 2019 the rumours became a reality as a surprise was installed at Martian Toys booth as the LIME GREEN Abominable Snowcone prototype was on display and we had the chance to check him out in person AND NOW THE ORANGE has arrived.

ABOMINABLE SNOW CONE ORANGE
The extremely limited flavour of just 75! *COUGH this may not be the only new Limon piece Martian Toys are revealing this weekend….

Find him at Booth #132 plus don’t forget Jason will be at the booth signing on Saturday 4pm- 6 Pm.