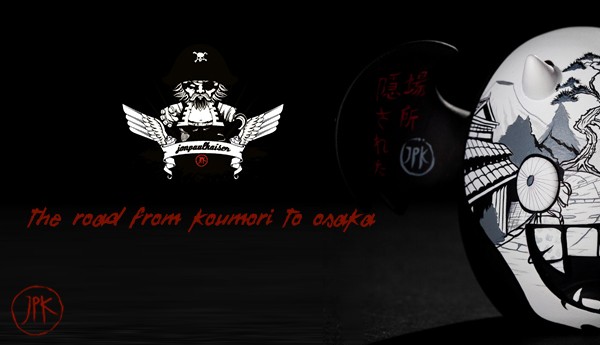 Jon Paul Kaiser reveals his Cranston Jr (originally by Lou Pimentel )custom for the When Hell Freezes Over 2 custom show at MPH. Titled “The Road From Koumori to Osaka ” using the Cranston Jr figure as a canvas he paints a story within the figure its self, but the cleaver thing about it is the face he incorporated features of the Cranston Jr into the painting, for example the clever Fxxker has painted the Geisha’s umbrella as the eye of the Cranston Jr and the originally  raised eye which adds another dimension to the design.

JPK blending both the skeleton figure into scene inspired by Ukiyo-e prints. Myplasticheart presents When Hell Freezes Over 2 a group exhibition featuring custom one-of-a-kind pieces based on Lou Pimentel’s original character – Junior. A sequel to 2010’s first exhibit of Junior’s predecessor, Cranston Fellows Jr. This time around the baby incarnation takes the spotlight as he is transformed and re-imagined by a tremendous lineup of artists, the who’s who of today’s art toy scene. With over 30 artists on board this show will be a sight to see.Join them for the opening reception on Saturday February 7th 2015 7-10pm. Exhibition runs through March 3 2015. Curated by Lou Pimentel
The line up also includes some Euro artist too including Map Map,Fakir, Richard Page,Bjornik,Huck Gee, plus our TTC artist spotlight artist Southern Drawl (his custom is the photo above)
Exhibiting Artists: 64 Colors,Andrea Kang,Bjornik,Brent Nolasco,Carson Catlin ,Chauskoskis,Chris Booker,Dril One,Fakir,Huck Gee,Ian Zombrowski,J*RYU,Jeremiah Ketner,Jon Paul Kaiser,kaNO,Kong Andri,Lana Crooks,Leecifer,Liz Sanquiche,Lou Pimentel,Macsorro,Map Map,Nerviswrek,Reactor88,Richard Page,Rsin,Joe Scarano,Scott Tolleson,Southern Drawl,Sucklord,Tasha Zimich,TaskOne and Zukie.
You can visit the Facebook Events page for the exhibition —>HERE<—
social links via Facebook , Instagram and Twitter.
If you were hoping to grab your own piece of customised goodness, then you’re in luck! His commission book is open so go, go, go!