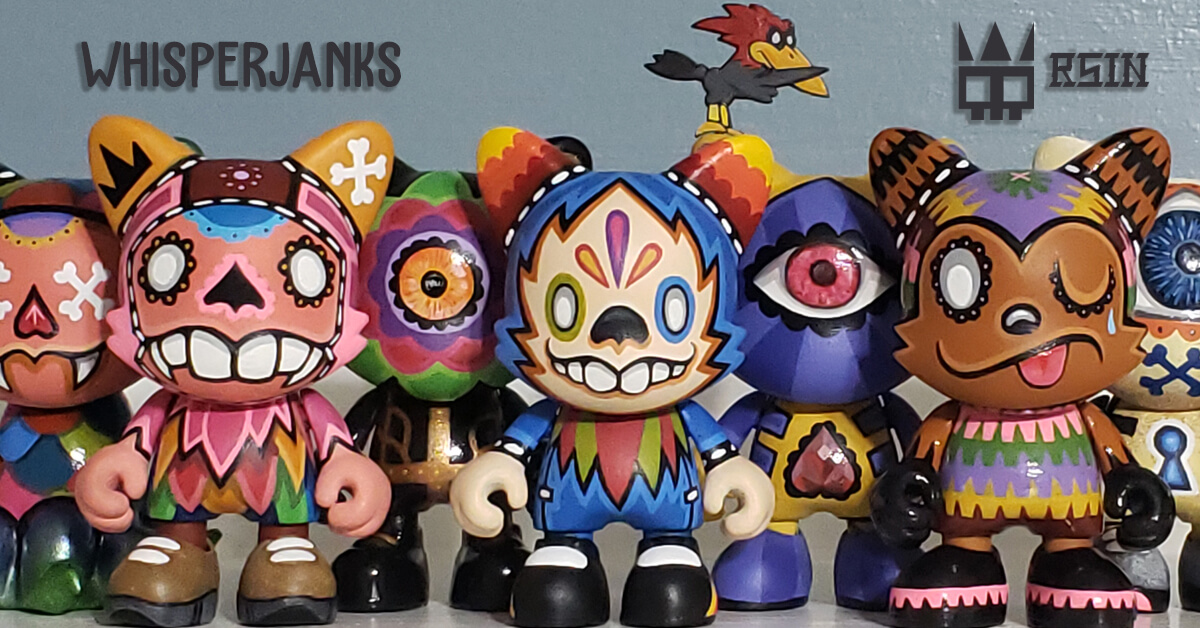 Ring the bells! Rejoice! For he is back! The legend that is RSIN is back! Due to complications with a health matter, RSIN has understandably had his art take a back seat whilst he slowly improves his health. If you are friends of RSIN on Facebook, you will have seen the journey that he’s been on over the past few years. It hasn’t been easy to watch but RSIN is made of tougher stuff and has slowly started getting back in the art game, and we couldn’t be happier!

What better way to make your comeback than to take on the new & fresh Janky by Superplastic. It’s the go to platform of a fair few artists, and rightly so, but we particularly love what RSIN has done with this custom WHISPERJANKS mini series. Taking eight of the 3.5inch Janky and giving them the RSIN clean lined, multi-coloured trademark paint jobs! Originally asked to be part of the SUPERPLASTIC event at Mothership Gallery (read HERE) tonight, RSIN painted up one Janky (seen centre in the image above). He decided to add to this by painting up an additional SEVEN. These will be available to purchase TONIGHT at 8pm EST (1am for us in the UK) over at whispersofthedead.bigcartel.com! The 3.5″ Janky will be sold as blind boxed and will be priced at $120 (£94) each + shipping.

Some newer guys with eyes, and not the blanked out look of RSIN ‘Whispers’, these guys see everything, and RSIN will be working this year on explaining the story of these guys! This excites us very much! More RSIN coming in 2019!

RSIN has also painted up an 8inch Super Janky titled Trust No One, which will also be available for purchase tonight too. Priced at $260 (£203) + shipping. You’ll be able to get your hands on this one-of-one custom HERE at 8pm ET tonight!

Having RSIN back in 2019 adds a whole bunch of awesome to the Designer Toy scene. RSIN may have been away awhile but his unique style still stands head & shoulders above most. We can’t wait to see what RSIN brings over the next 12 months. Hopefully it won’t be long before those in higher power will be calling on RSIN to design for a production release. Hint, hint, Superplastic. Hint, hint!

Go find RSIN on Instagram and show him your love HERE.