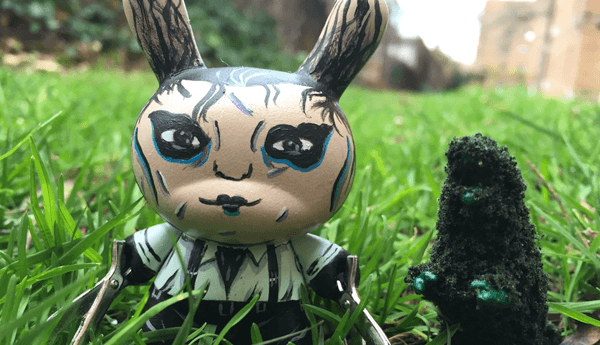 Edward Scissorhands is one of our favourite culf figures from the 90’s. We love Johnny Depp as the scissored hands of Edward. We were quite excited to see We Are HungryGhosts start a new Cult Figure custom figure series. First up is Edward Scissorhands. Yay.

We really admire what We Are Hungry Ghosts have accomplished previously with his crystalised Geode Custom Kidrobot Dunny, but feel that the line work on this Scissorhands custom Dunny isn’t the highest level of quality. We are only going on what pictures we’ve been sent, so perhaps the lighting didn’t capture this piece successfully. Personally if you want to charge $75/£50 for a custom, we think that you should use the right images/photographer to capture the pieces in the best light etc.

We Are Hungry Ghosts will drop Edward Scissorhands on their store HERE on 31st December at 5pm GMT. Edward comes with a t-rex bush sculpture, and tiny little scissorhands – which are a nice touch. Future custom Cult Figures will be released throughout 2016. Every 31st of the month and every Friday 13th. We hoping to see a better quality release on 31st Jan 2016.