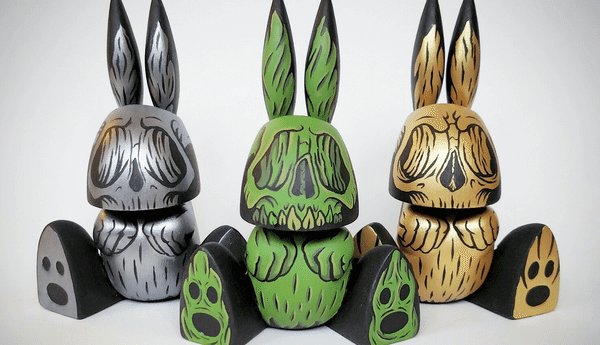 Coming in three flavours, the Atomic Bunnies will go on sale on Friday 10th April priced at $65 (£43). Cat Atomic had this to say about the Atomic Bunnies release…

[pullquote]The concept for the Atomic Bunnies, custom painted Joe Ledbetter Mini Chaos Bunnies, was originally thought up as way to revive a style of art work I worked on years ago. As a way to see what the reception of this style would be, I held a contest to win the original blue and yellow atomic bunny. Having been blown away by the amount of positive feed back, I decided to create 3 more in order to give others a chance to own one of these bad ass bunnies and release them exclusively through Suburban Vinyl.[/pullquote]