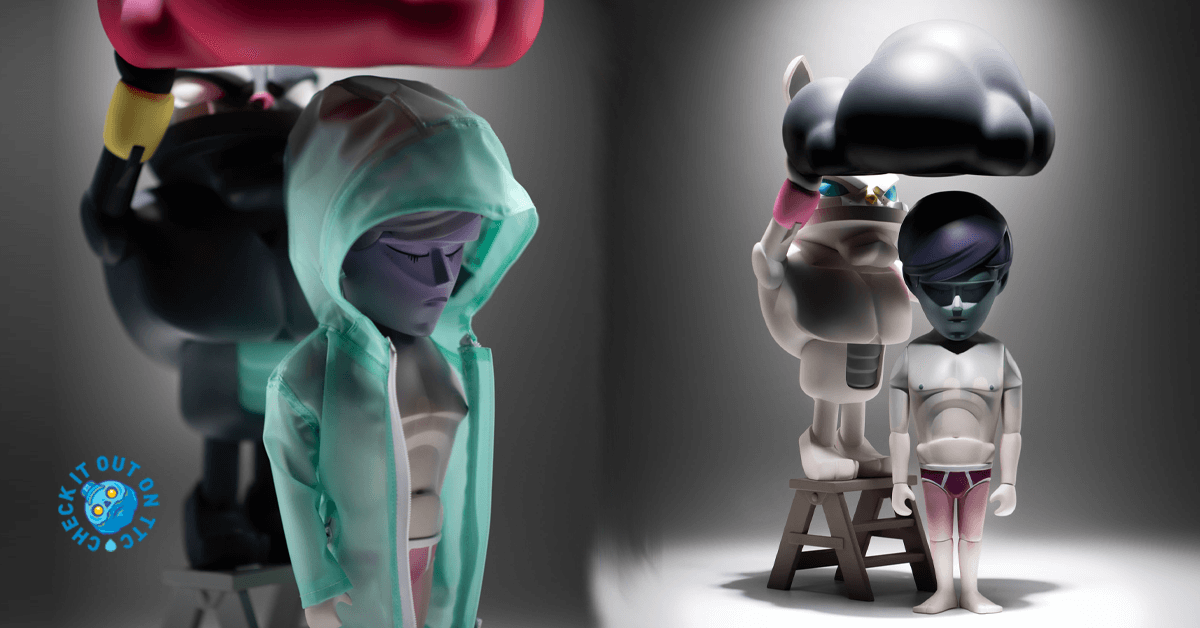 You Used to Keep Me Warm – Nightshade!

Whilst having all the excitement writing the release of the new Superplastic Janky Series Three earlier this evening (read HERE) when I saw the new release from coarse and almost fell off my seat with all the awesome-ness! Two new figures bringing the False Friends back to the fore of Designer Toys! You Used to Keep Me Warm! Stunning new works from Sven & Mark (as to be expected with them two, tbf). You can check out these new works below….

An iconic duo returns
For a thunderous new chapter
In the story of their friendship.

Sometimes the people who caused us pain are the ones we miss the most.

False Friends – You Used To Keep Me Warm is an emotional exploration of this paradox, asking us why we let ourselves live beneath the same weather patterns, encouraging us to break ourselves free from the storms in our lives.

noop wishes he could forget paw!, but letting go is never easy. As the rain pours down, he knows he can take a step forward and leave paw!’s cloud behind. And one day he will do that. But right now all he wants is to see paw! one last time, so he closes his eyes, steps inside a happy memory, and lets the thunder crash around him.

This 18’’ gravity-defying depiction of noop’s emotional landscape comes in two unique editions. Loser finds a bliss-white paw! holding a dark cloud over noop, who stays dry in a solid gray jacket. Nightshade presents noop in a translucent mint-green raincoat and standing beneath a sunset cloudburst just as another tempestuous night begins.

Each order comes with a vengeful paw!, his menacing raincloud, and a melancholic noop braving the storm. Wet from the rain, a mix of colors rush down noop’s face and chest. A removable double-stitched raincoat with functioning zippers, drawstrings, and a rear air vent protects noop from an immutable weather forecast. A ladder reinforced with magnets ensures paw!’s safety as he stands on his toes, looming over his long-lost companion.

A cloud may hang above your head, but every storm will pass with time.

You Used to Keep Me Warm – Loser!

In the weeks since paw! left him wounded and aching, noop has attempted to find a new companion but he always ends up alone.

When he tried befriending a tree, wind swept through and pushed its branches away from him. When he reached up to the breeze hoping it might love him back, the air became still in an instant and the wind held its breath, waiting for noop to disappear.

When he picked a rock to hold it close, it set off a landslide. A flower he plucked withered in his hands, fog evaporated when he touched it, clouds casting comforting shadows cracked with thunder when noop looked up. He tried talking to the moon, but each night it got smaller in the sky; he tried laughing with the sun, but every evening it betrayed him, falling behind the horizon despite noop’s pleas for it to take him along.

You could have all the love in the world to give away and no one to give it to, because the only friend you ever had turned out to be a false one.

Yes, this is what it meant to miss someone, and noop didn’t know how to move on.

It would have been easier to be someone else. Some noops stayed in the shells that had hatched them, never stepping foot past the groves where they were born, and they lay there peacefully, never losing anything because they had never brought anything into their lives they could lose.

Other noops saw life as a battle, and they wore helmets and summoned the auras within themselves to survive against the paw!s and Locks and that pounded the earth with their fists.

But noop—this noop—had neither been fearful nor brave. He had never wanted the safety of a nice home or the valor of victory. All he wanted was a friend, the only friend he ever had: paw!

One time, not long after they first became friends, noop and paw! were walking across a marshy plain when they came across hundreds of footprints fossilized in the earth.

“Look,” noop said, placing his feet inside them. “They’re the same size as mine.”

“They’re from the noops who came before you,” paw! said.

“What happened to them?” noop asked. “Where are they now?”

paw! Explained how every spring hundreds of noops are born on the elastomer, and every autumn the harvest comes and a mysterious force takes them away. Once the harvest is over, all noops disappear and are never seen again, until next spring when a new batch is born and the cycle repeats.

“Do you know where we go?” noop asked, stepping out of the foot prints and finding his own path across the plain.

“So what am I supposed to do?

“Enjoy your time on the elastomer while you can.

noop thought about this. “It’s nice to have a friend,” he said.

Something has changed in the air. The afternoons are not as warm at they were just a week before, and the days seem shorter, the nights endless.

noop remembers a time like this, in the early days of spring when he broke through his shell and fell from the tree that bore him. He believed that the longer you lived, the warmer the elastomer became, but the electric winds that find him now send a chill through his bones, like a warning.

noop only has a hazy idea of what this means. But rain comes more often now, watering the fields where new trees will blossom so that new noops can hatch in the coming spring and replace him. The harvest is coming, and in the span of his brief life on the elastomer, all he has learned is what it means to have a friend, and what it means to lose one.

He takes a seat at the top of a hill where he and paw! used to look out at the elastomer. He has been on this planet less than a year, and already he has to say goodbye. He can feel the color draining out of him, all the joy left inside him passing through his skin and exiting his bones. The end is near now.

Just as noop closes his eyes it starts to rain—not a small drizzle, but a tempestuous storm, bursting with thunder and lightning. noop holds himself, shivering in the cold.

Then, something rustles behind him: footsteps coming up the hill.

First he sees two ears, then the face he once new so well.

There is nothing more to say. All they can do is sit beside each other like they have countless times before.

The rain pounds their heads, and even though noop can feel the force of the harvest approaching, he is not alone beneath the clouds anymore. The force gets stronger, and noop readies himself for what is to come, but he has a friend again. And for the few moments that remain, this is all that matters.

Release Details of You Used to Keep Me Warm

Dropping on 1st October 2020, there are two editions of You Used to Keep Me Warm available! Loser and Nightshade, both priced at $388 each. Limited to $388 for the Loser and 288 pieces for the Nightshade! They stand at a whopping 18inches tall!!!

They’ll be available from 4.59pm BST next Thursday 1st October from https://coarse.shop! Unless you are a F&F member with coarse, and then they’ll likely be available in the coming days!

18"coarseloseryou used to keep me warm