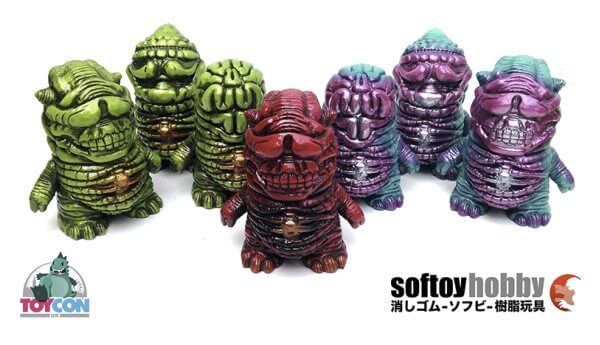 We had a great time with the guys from Softoy Hobby at ToyCon UK ’16, we couldn’t even resist getting some fresh keshi ourselves.

For those of you who couldn’t attend there will be some select stock to be released online next week along with a few leftovers and even a couple of surprises that didn’t make it to the event;

Featuring both SS Wolfgang and Selwyn, these MaBa Zombies-inspired finger puppets have been cast in a GID soft vinyl complete with teal rub, violet sprays and silver detailing.

Limited to 10 sets, each coming packed in a deluxe display box with matching GID keshi, these have been priced at $85 per set. A limited run of blank GID sets will also be available for $60 each.

One-off Oozeballs inspired by the Teenage Mutant Ninja Turtles, these have been rubbed, sprayed and brushed by Tru:Tek in metallic Monster Kolor paint.

Just Michaelangelo and Raphael remain, coming in at $100 each. 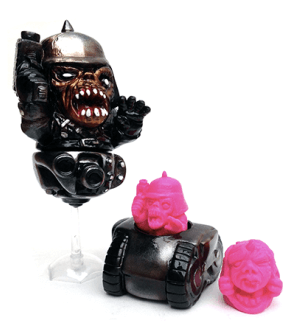 Hand painted by Tru:Tek, each set comes with a hovertank mounted on a display base with magenta keshi that fit in the tank base. Limited to 4, these have been priced at $75 each.

The first exclusive release for Tru:Tek’s collaboration with Awesome Toy, the micro-sized super ‘bot keshi has been cast in a GID rubber this time around.

Limited to just 10 pieces, each packed in a gacha capsule with insert and keychain attachment, these have been priced at $7 each.

Continuing the TMNT theme, Tru:Tek has customized yet another upcoming figure from Radioactive Uppercut in those classic greens and browns, the clawed kappa known as Freakboy! Sculpted by Tim Stephson based on RU’s original design, the little guy – standing at around 2.5? tall – has been cast by Tru:Tek in a keshi-style rubber, coming with various sprays and detailing to mimic TMNT’s Raphael. Limited to just 1, TMNFB can be yours for just $35.

“Darkside of the Rainbow” Arch Mage

Continuing his collaborations with Science Patrol (of which we hear there’s more coming very soon!), Tru:Tek has set about working on a micro-run of their ever-popular Arch Mage sofubi. Cast in a flesh vinyl, the little guys have been treated to a plethora of metallic pink and purple sprays over a black rub. Limited to just 3 pieces, these have been priced at just $30 each.

A custom mash-up of Kenth Toy Works/acolorfulmonster’s Zombitron and Shimomoku’s Lampu, this adorable little figure has been adorned with a variety of metallic sprays and hand brushed detailing. Limited to 1, priced at $45.

As well as Tru:Tek’s exclusives, the Softoy Hobby booth also had the honor of stocking a very limited supply of Bad Attic Toys‘ Trouballz sofubi. Available in 3 different vintage-themed colorways, painted versions have been priced at $85, whilst blanks will set you back just $60.

All of this will be available at Softoy Hobby store starting Wednesday, April 20th at 9pm London time (check www.worldtimebuddy.com for your local time).

Check out Tru:Tek/Softoy Hobby Instagram feed here for a look at the surprises to be revealed closer to the sale.