If there is one thing that TTC loves more than Designer Toys, it’s our love for beer (and Cats too). So we were crazy happy to hear that the guys at Five Points Fest have worked in collaboration with Sixpoint Brewery (from Brooklyn, NYC) to brew Mad Scientist exclusively for Five Points! This Sour Cherry Double IPA (all the YES!) will be available from the Beer Garden (see our Exhibitor Map post HERE) during the course of the weekend! Art and beer combine in perfect harmony with Sixpoint Brewing’s Mad Scientist, an exclusive double IPA, their signature style, brewed specially to commemorate the first year of the Five Points Festival. Sixpoint’s commitment to quality and creativity echoes the high-level craftsmanship on display at Five Points, with great care taken to create the perfect companion beer. Both beer aficionados and Festival enthusiasts will appreciate the juicy cherry flavor profile and thematic hop aroma featuring Mosaic and Galaxy hops further bridging the art and beverage worlds. The beer debuts at Five Points on draft, and after resting in Sixpoint’s lambic barrels, will be available in local bars all over New York City.

Head brewer Marcus Lutter said of the process, “We worked really hard to create a beer that personified the artistry represented at Five Points Festival. Using a barrel to age the beer added complexity while tart cherries offered balance and we think a variety of beer drinkers will enjoy our latest roll out.”

We can’t wait to get stuck into this ale from Sixpoint. We think that this is only available through keg on the day, we don’t know if it will be canned/bottled for the festival. If you haven’t bought your ticket to Five Points, you can jump on over to their site HERE, where you’ll find the all-important details!

There will be other breweries taking part at Five Points Festival, which you can find below. 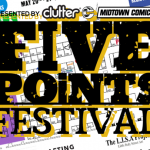