In less than 24 hours to go before POP MART Unveils MEGA Space Molly for the First Time in Europe at DesignerCon UK. We are pretty sure Kenny Wong’s Molly needs no introduction right? SpaceX move along as it’s time for MEGA Space Molly!

POP MART, the global culture and entertainment company best known for art toys and collectable toys, unveils its high-end collectable art toys, MEGA Space Molly, at DesignerCon UK in London through Aug.20th to Aug.22nd. This will be the first time that MEGA Space Molly is exhibited in Europe.

POP MART has endeavoured to discover trendy artists with great potential, and through a mature and comprehensive IP operation system, a great number of series of trendy IP characters such as Molly, Pucky, The Monsters, Dimoo, Skullpanda were created. These IP characters bring joy and surprise to the art toy community and to their global consumers.

There are currently TWO levels of tickets available for purchase for DesignerCon London. Please note: In the event of any cancellation all tickets with being refundable or transferable to new dates. Tickets are 100% refundable until August 6, 2021 for any reason. This is a great addition, as it gives assurances to ticket holders that DCon is taking matters of COVID seriously. We are in a crazy world right now, there is no denying that, but hopefully, as the UK re-opens we can look forward to events like DesignerCon London. 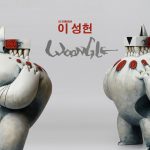