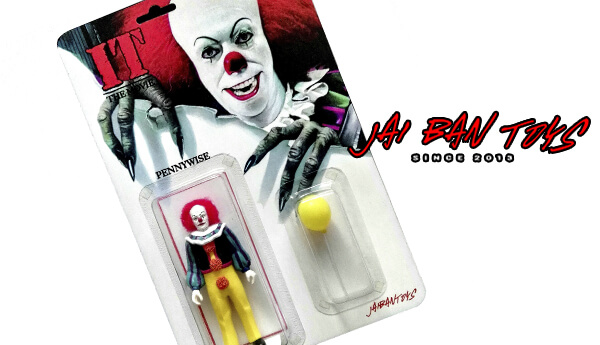 Iban Torres, creator and owner of Jai Ban Toys has something very special droppin’ for this halloween! Being inspired by Sci-fi films and toys of the 80 he created a figure of the famous IT, a character from the  1990 supernatural horror miniseries based on Stephen King’s novel of the same name! That’s right, if you’re afraid of clowns leave know he’s here and looking in shape, Pennywise the Dancing Clown! A limited edition of 100! Made in resins with a plastic baloon (random color),handmade packaging, hand painted and handmade! You know some of us here at TTC love bootleg figures and this one looks very well done, at least the face sculpting looks great from the pictures. A work from a true fan and artist.

“It is a 1990 supernatural horror miniseries based on Stephen King’s novel of the same name. The story revolves around an inter-dimensional predatory life-form, which has the ability to transform itself into its prey’s worst fears, allowing it to exploit the phobias of its victims. It mostly takes the form of a sadistic, wisecracking clown called Pennywise the Dancing Clown. The protagonists are The Losers Club, a group of outcast kids who discover Pennywise and vow to destroy him by any means necessary. The series takes place over two different time periods, the first when the Losers first discover Pennywise as children, and the second when they’re called back as adults to defeat Pennywise, who has resurfaced.”

Already available HERE for 35.00€! A great piece for this season!