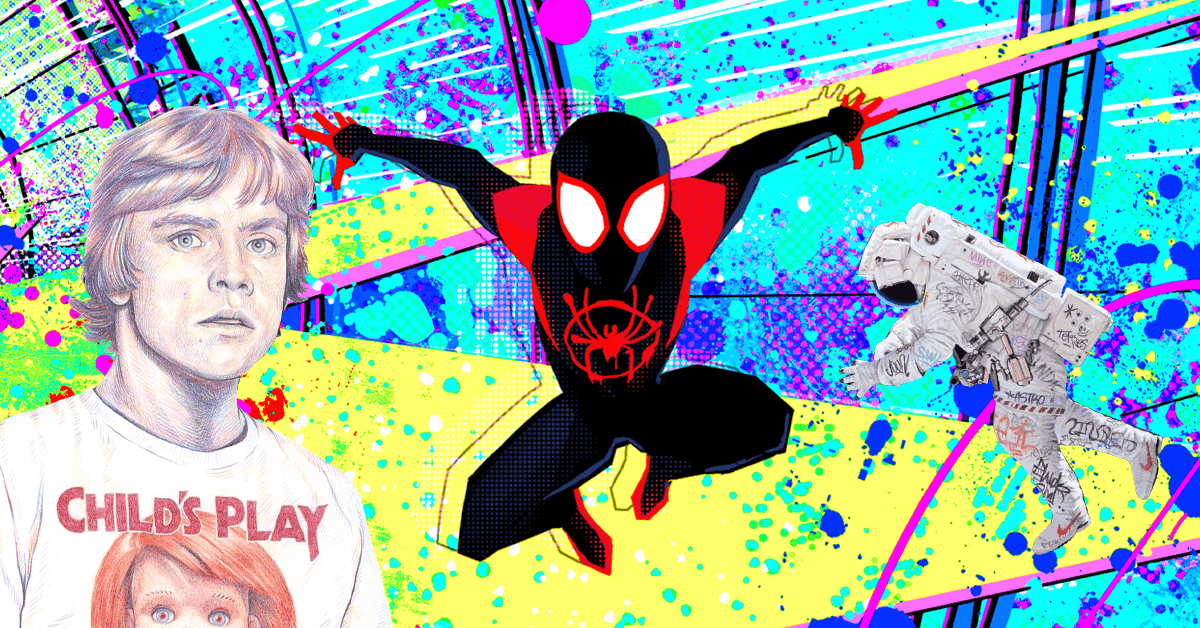 DesignerCon 2019 is literally around the corner. We are now less than 10 days away from VIP Night opening next Friday 22nd November. This time next week, we will have our LA suitcase packed and our alarm set for 5am for our flight to LAX next Thursday morning. It is starting to feel real again, rather than just words & pictures we present on TTC.

Whilst our main focus is on the Designer Toys aspect of DesignerCon, rightly so as we are a Designer Toy blog afterall, there is so much else on offer that we would like to take the time to share some of the cool shizzle that is going down at DesignerCon 2019!

Spider-Man: Into the Spider-Verse VR Tunnel by Sutu, Sponsored by Sony Animation

Spider-Man: Into the Spider-Verse was one the smash hit cinematic releases of the last year, grossing $350MIL worldwide. At DesignerCon 2019, Sony are teaming up with DCon to bring a glitch art tunnel drawing attendees into the Spider-Verse themselves with a cutting-edge VR tunnel, featuring original art and animation from the groundbreaking film! Damn! That sounds hella cool!

The work has been created by famed VR and comic book artist Sutu and is sponsored by Sony Animation. We CANNOT wait to check this out at DCon next week!

Many of us will fondly remember Mark Hamill’s Jedi skills in the Star Wars universe as we were growing up, but how many know that Mark has often voiced some of the iconic cartoon characters over the last three decades. Busy boy. From Joker in the legendary Batman: The Animated Series to The Hobgoblin in the Spider-Man animated series, Solomon Grundy and Trickster in the animated Justice League and Justice League Unlimited series, to name a few. Other iconic IPs he’s worked on include The Simpsons, Time Squad, Super Robot Monkey Team Hyperforce Go!, and Avatar: The Last Airbender.

Hamill has found success in the videogame world as well, lending his voice to projects such as Crash Bandicoot, Full Throttle, The Legend of Spyro, and the Kingdom Hearts series.

Feels only right that Hamill is celebrated, and celebrated he shall be at DesignerCon. Curated by Carmen Acosta, HAMILLTOON: The Many Voices of Mark Hamill will showcase over 60 artists who love Hamill as much as you all do! Featuring never before seen work by Jim Mahfood, Skottie Young, Allison Bamcat, KMNDZ, and nearly five dozen more, the broad collection of paintings, sketches, and beyond will be on view for the entire DesignerCon

As part of Hamilltoon, DesignerCon have partnered with Mark Hamill, OfficialPix to release four limited-edition Funko POP! figures. Three of which are pictured below. The Metallic Purple Joker Mark Hamill (limited to 1000) is an MVP Exclusive for DesignerCon, and can only be obtained by purchasing an MVP ticket. There is also

The MVP ticket also guarantees the plain clothed Mark Hamill, sporting a tee emblazoned with his son’s artwork (Nathan Hamill, for those asking at the back). A second plain clothed Hamill, as well as a non-Metallic Joker POP of Hamill available for purchase at DesignerCon too.

The 60+ artists involved in Hamilltoon are listed below! Some of the names that jump out as ones we can’t wait to see with our eyes are Flat Bonnie, Lou Pimentel, Scribe, Thomas Han and Tracy Tubera!

Some of the examples of the work that will be showcased at DesignerCon Hamilltoon exhibition!

As you can see from the beautifully mapped picture below, the TTC DCon Booth (along with Clutter/Five Points Fest) is right by the Hamilltoon Group Art Show area. So if you’re heading to check out Hamilltoon, swing by booth #3424 too and say Hi to the TTC krew!

So that is three different aspects to DesignerCon that you can expect next week in Anaheim. With 350,000 sqft of space at Anaheim Convention Center, there will surely be something that captures your imagination. We can guarantee it. There will be more DesignerCon news in the coming NINE days, so keep your eyes on The Toy Chronicle for more details!

If you’re considering heading to Anaheim next week, you can grab your DesignerCon tickets using the button below. We look forward to seeing your faces!