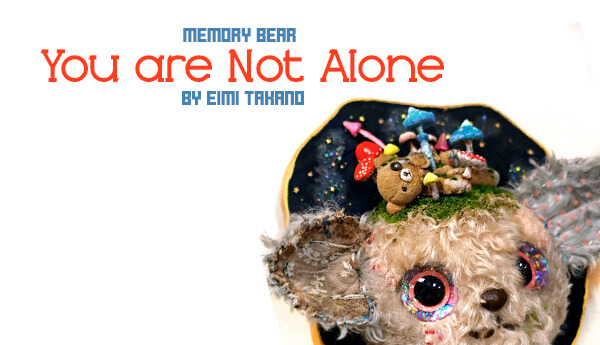 Conjoined 7 show is on the horizon and we’ve already shown you Tokyo Jesus “Rambha  (Little Demon)”  yesterday. Today TJ’s other half  Eimi Takano is about to add a little cuteness into Conjoined 7 show with her all new “Memory Bear” titled “You are not Alone”. Eimi adaptation of her own Memory Bear into a slight creepiness to her Memory Bear especially for the show. All hand crafted from Wood, clay, clothes, resin and thread. “The bear was living alone in the forest for a long time. One day, he found a little-stuffed bear someone has lost. He decided to live with the little bear and put on the head. They’ve been together for the whole day and a long time had passed. We’ve seen Memory Bear before never as dark as this. Poor Memory Bear, makes us think he’s been left alone and unwanted. Hand us a handkerchief. Eimi was invited last year for stranger Factory. These pieces are available now on their web shop and gallery. To buy her artwork you can visit http://www.aliceandbeanstalks.com/shop which also includes her partner in crime Tokyo Jesus artworks. Here are a few releases in store NOW.