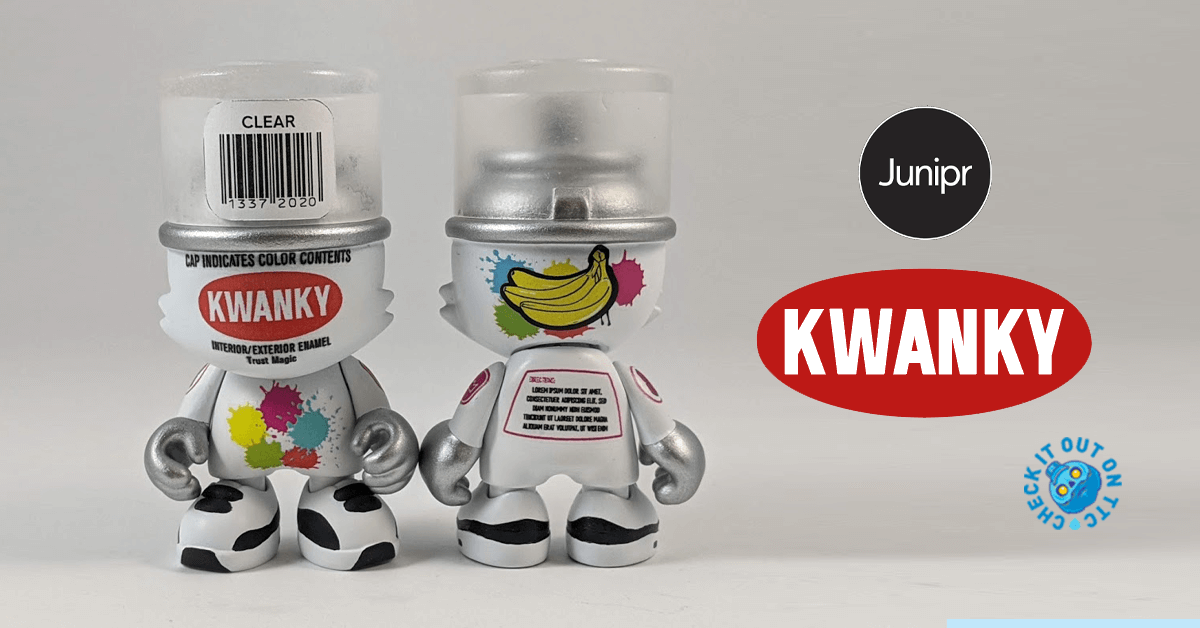 If you cast your minds back three years, you may recall that artist Eagon blew up the coarse Omen (read HERE) so the sequel to Honey, I blew up the Omen is naturally, Honey, I shrunk the Kranky! HA! Which is exactly what Eagon (under the guise of his new artist name, Junipr) has done. Of course with the permission of Sket One (the original designer behind Superplastic’s Kranky releases. We have to say, these looking f’n dope AF! Check them out below….

These are all about 4inches tall, so half the size of the OG production Kranky.

Check out below what Junipr had to say about his Kwanky version of Sket One’s Kranky….

I wanted to make a 3.5″ kranky. That was it. I decided I could model the head part and cap the same way the 5″ Kranky was made however I did not have one. I ended up asking Michael Laidley (a big Janky fan) a bunch of questions and he would always get back asap. I scanned in the head and modeled the top part, tip and cap on top of it and made it the same size as a 3.5″ janky version because I had a lot of them.

I printed all the three parts I modeled and cut off a janky head and adhered it on top and cleaned up the edges. I then molded and cast the three parts. I had to go through so many Ouch Jankys for all of the bodys, arms, and shoes.

Then I had to figure out how to redesign some of the designs. I worked on it for awhile but then reached out to Carlos Ortega and he recreated the original design that Sket did. I thought I should make it different because I made them so I went back and created the rest of the graphics.

This is how the idea “Kwanky” was born. I talked to Sket to make sure he was cool with it. He said yes and wanted one. So I made an extra for him.

I wanted to print on the figures because I had access to a UV printer and would best replicate tampo printing. However I figured it would take a long time to make a jig to rest the figure in to print on top of it and make sure it was straight and center on all the parts. I decided to look at what train modelers use. I used waterslide decals where it is a really thin piece of plastic that gets printed on and I used water and two other secret liquids to set and thin out the plastic. I then used a matte clear coat to layer it on and hide any of the edges of my cut around it.

I decided to cast a clear cap and thought I could make a few and a few diy versions. I was not sure how many were interested so I held a preorder to fill slots. It was a great outcome. I wanted to make it super special so I designed a box that everyone comes in. I did not think I could fill these orders fast enough so my last person I reached out to was Kay May. She helped me out and painted all of the shoes for the Clear Cap Kwanky!

There was so much in this whole project I am glad I had friends who could help out! I plan to make more and more random projects on my Junipr page. I also hope everyone makes really cool versions of the Kwankys! I made 14 DIYs in this run but I hope to make more in the future. This also really helped me pay for rent this next month. Covid suckssssssss.

COVID does indeed suck! But it has allowed artists the time they have need to create some great designs, Kwanky being one of them! We have included some pictures that Junipr has sent over of his production of Kwanky, check them out below….

With the popularity of the production Kranky hitting high notes with collectors, it make sense that collectors will also be on the look out for the custom Kwanky by Junipr. It has that similar feel to the fan-made PAW by Chauskoskis, where Chauskoskis created the mini mash-up of the Dunny and coarse toys Paw! Folks went crazy trying to get their hands on one of those highly sought after customs, and still do too! We will keep our eyes & ears open for more of the Kwanky as Junipr makes more. Which we hope he does, as we want one for our Kranky/Kwanky collection!