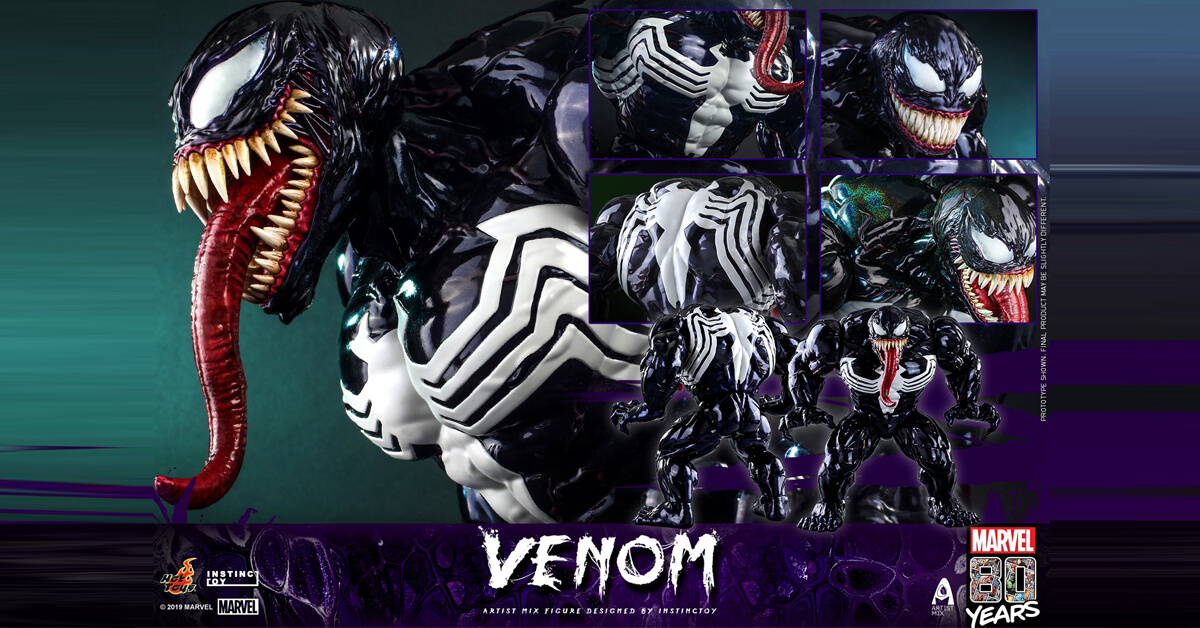 WHAT THE HELL! HOT TOYS and INSTINCTOY link up to present you all, Venom Artist Mix Figure Designed by INSTINCTOY! HOT TOYS using their Marvel licence giving INSTINCTOY the control to put their mark on Marvel’s Venom in celebration of MARVEL’s 80th anniversary.

『This is the soft vinyl VENOM figure I always wanted!』 HOTTOYS × INSTINCTOY “Venom Artist Mix Figure” Designed by INSTINCTOY When we received an invitation from Hot Toys, I was very excited to be offered the opportunity to work with MARVEL COMIC characters and to complete our first product as part of the „Artist Mix“ series. Having the chance to choose „whatever character I like“, made a dream of mine come true. Among the many options, I chose “VENOM” without hesitation. I still remember the time watching the “Spiderman 3” movie, which was released in 2007.

I was so impressed and inspired by the moment, where the black symbiote creeps up to Spider-Man. The first original character created by me was inspired by this scene from the movie, and the mysterious liquid creature “LIQUID “, which erodes the living body, was born., VENOM has always been one of my favorite characters. In some ways I feel that I have a special connection with him. This humanoid soft vinyl figure created by INSTINCTOY stands at a height of about 34 cm. The height is based on my own theory after observing what the most “attractive soft vinyl format” is like. This time, we designed VENOM according to this format. As a fan and collector, I always liked the character of VENOM very much, and I was very happy to take on the job of designing a VENOM soft vinyl figure just the way I would want it myself.

I hope to pass on this feeling to The hearts of many people.

We had to look closer to see INSTINCTOY signature pearlescent and gloss style.

Special pre-orders for 300 pieces will be accepted at the HOT TOYS booth (B69) at BTS2019 (Beijing Toy Show), which takes place from 16th August to 18th August. Each figure is priced at 1,980In addition to that, a prototype sample will be displayed for reference at the INSTINCTOY booth(A52).『一直期待擁有這樣的VENOM軟膠公仔！』 HOT TOYS × INSTINCTOY “Venom .