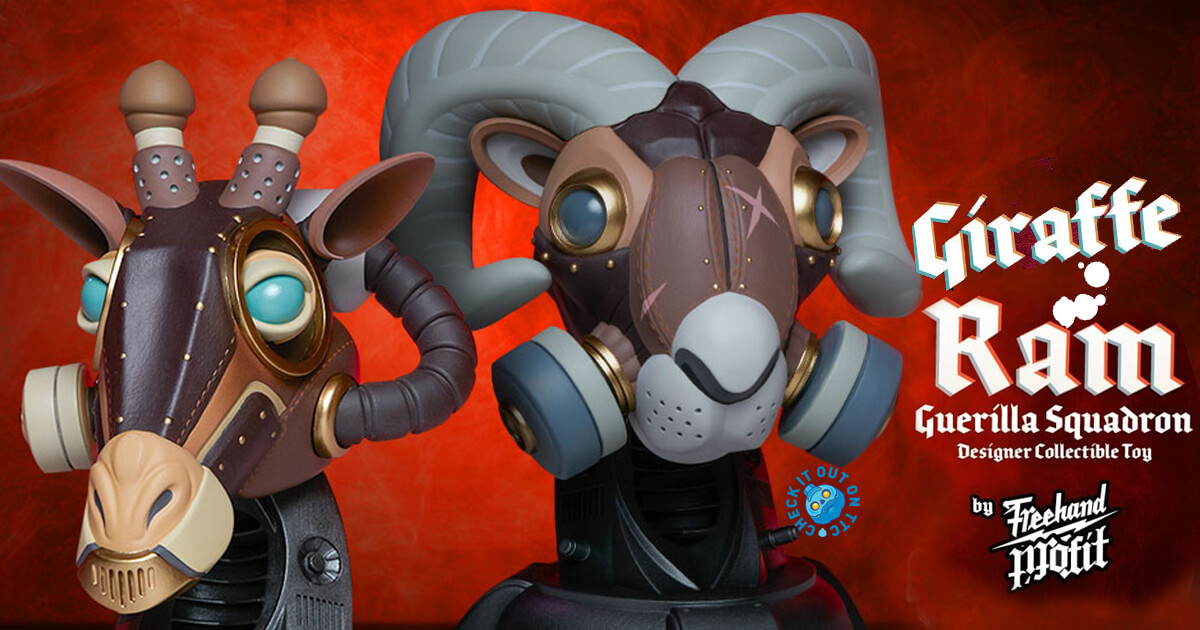 Welcome to the Guerrilla Art Squadron. An eclectic pack of stylish animal survivalists. The first pair of creatures we come across in this post-apocalyptic petting zoo is the Giraffe and the Ram. How’d we get here? I’m not sure but you better grab a mask quick if you wish to survive! At some point, we forgot we’re not the only species on this planet. Despite an effort to reverse our Kamikaze run of war, consumption and pollution; our time as the dominant species came to an end. It wasn’t the end for the rest of the planet though, evolution continued to push forward. Beasts of all types developed amongst an ever-changing world, constantly engineering new ways to survive the hostile environment humans left behind – namely gas masks that allow them to breath in a now toxic atmosphere.

Embrace the urban jungle and squad up with the Ram and Giraffe: Guerilla Squadron Designer Collectible Toy Set by artist Freehand Profit. Inspired by the artist’s traditional sneaker canvas combined with a vintage gas mask aesthetic, these wildly imaginative collectable creatures can be displayed on a shelf or mounted on your wall with an ambigram that reads “PROFIT” in either direction.

Gary Lockwood aka Freehand Profit came up in the DMV area as a lifelong artist with a passion for Hip-Hop, graffiti, sneakers and art. In 2005 he graduated from the Corcoran School of Art & Design with a Bachelor’s in Fine Arts.

In 2006 he made his move to LA to pursue his dreams of art, design & music. Some folks call it persistence, some call it stubbornness; whatever you call it Freehand Profit continued to push forward and in 2010 he began his daily creative project – MASK365. In the search for new materials, he began creating gas masks from deconstructed sneakers. – Freehand Profit