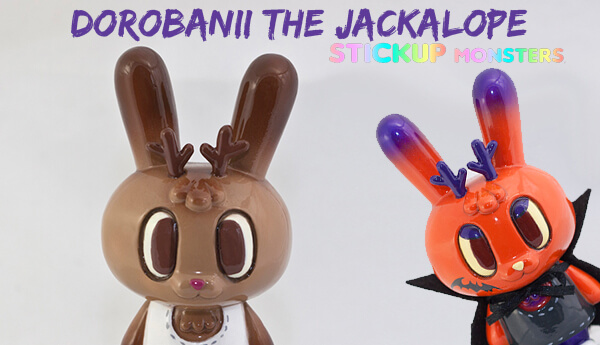 It’s been a while since we heard anything from our friend Javier Jiménez of StickUp Monsters. Till today we all know now he’s been busy working on his next character design and that’s this cutesy pie, whose name is Dorobanii the Jackalope, sculpted by Cristina Ravenna and painted by Javier. It wouldn’t be Javier Jiménez without a storyline to go with Dorobanii right.

“Dorobanii is the latest addition to the StickUp Monsters universe, and it has its own figure for the toy line!

Dorobanii is a little and timid jackalope that used to live in a North American desert. He was used to his life: some chilling at the desert, then some house robbing at the city. He stole a little bit of everything: from human food he enjoyed to small jewels and things that could pass unnoticed and people would think they had lost.

One day he entered the wrong house at the wrong time, and ended up locked inside of a suitcase on its way to Japan! If you want to see what happened next, you better see the full story in this”

The toy will be first available on Sunday 25th of October at 11AM EST, at www.stickupmonsters.bigcartel.com in two different editions: the original colorway and a Halloween version. Both will have very limited quantities with the Halloween version being a closed edition of just 15 pieces available worldwide. Too cute to miss right? originally We didn’t want to share this released info as it would ruin our own chances of owning one. But being how nice we are we decided to go against the idea. Dorobanii WE ARE COMING FOR YOU!