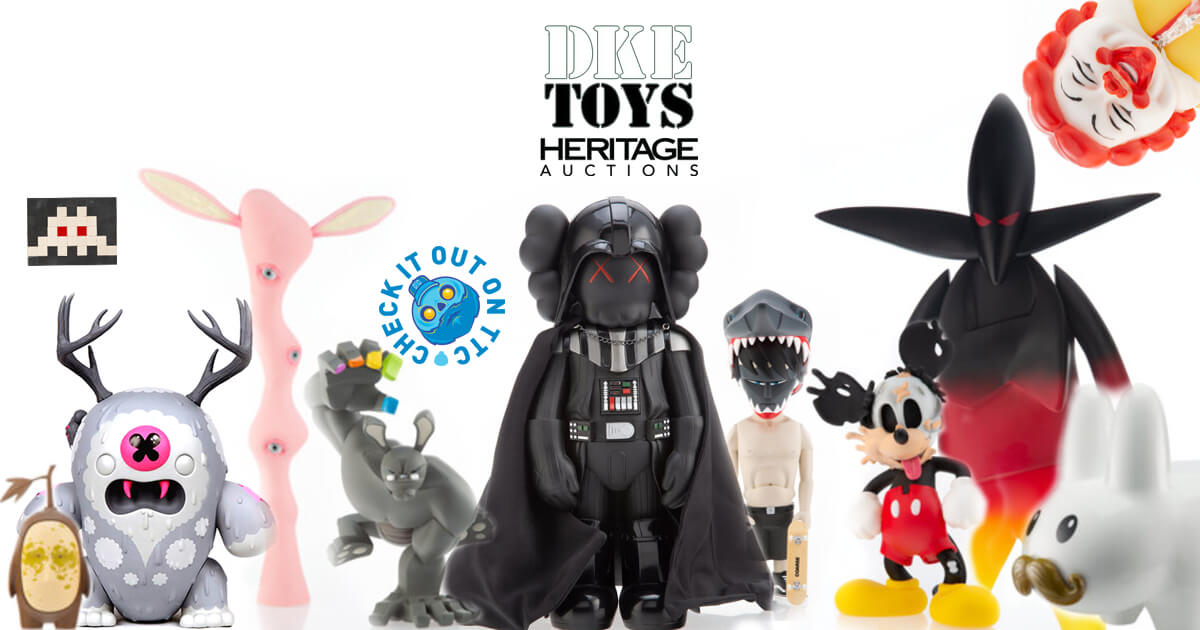 Mark your calendar, get those excuses ready for the Mrs as the one and only Dov Kelemer of DKE Toys opens up his DKE Toys Archive! Classed as one of the Pioneering well respected designer toy distributor and Collector who has helped many independent artists and bands throughout the years open up his personal archive! DKE Toys makes history with a major stand-alone auction of designer toys as Dov Opens the Vault For Heritage Auctions! Below is few examples of rare and sought-after gems!

The DKE Toys Archive Auction is set to make history as master collector Dov Kelemer presents the world’s first stand-alone sale of designer and art toys from dozens of artists, designers, and creators.

The DKE Toys Archive event is filled with collectible works created from the inception of the designer toy scene in the early 2000s until today. This is not only a history of DKE Toys but a chronology of the designer toy movement. Its breadth only reflects Kelemer’s wish to give fellow collectors access to the hobby’s most sought-after works – among them 2002’s Invasion Kit #1: Albinos by Invader, which is considered a seminal piece by street-art collectors.

“Each of the 160 lots offered in this online event is a coveted highlight among collectors,” Kelemer says, “and includes some of the most renowned artists working in the scene.”

Look no further than Frank Kozik, who single-handedly revived the rock poster scene in the 90s, who turned his attention to art toys only to later become chief creative officer for Kidrobot. More than three dozen lots of his pieces are highlighted in this event, among them are complete sets of his landmark large scale bust series, Ho Chi Minh (set of 12, 2007), Dead Che (set of 13, 2010), Ludwig Van (14 color ways offered individually, 2008), Gipper (set of 13, 2012), and Big Army Man (set of 11, 2009). Here, too, collectors will find his painted fiberglass stool Stache Happy Labbit Stool (White), a recent piece, and one of his most iconic Kidrobot offerings, RedRum Dunny from 2008.

Ron English is here in collaboration with The Showroom NYC for 2004’s MC Supersized (Glow in the Dark). That was the same year the artist created the character, based on a certain fast-food mascot, for director Morgan Spurlock’s documentary Supersize Me. In due time, bootlegs of MC Supersized became wildly popular in China; this one, of course, is the real deal.

Graffiti artist Futura, who once made subway stations his canvas and shared stages with the Clash during the band’s 1981 European tour, remains the rock star of the art toy world. Heritage is thrilled to include in this event one of each of his iconic painted vinyl pieces from 2005: Nosferatu. The auction will also feature Futura X adFunture’s circa-2008 collaboration FUTURA Tag.

Most of the pieces here are limited editions, among them 2005’s Andy Mouse (Red) from The Estate of Keith Haring X 360 Toy Group; The Sucklord’s deeply coveted two-piece Sucklord 600 (AFA graded). And of course no sale of collectible toys would be complete without an offering from KAWS, in this case 2007’s Darth Vader.

“We expect the sale to break multiple world records,” says Leon Benrimon, Heritage Auctions’ Vice President of Modern and Contemporary Art. “Many of these items are coming up for the first – and, possibly, the last time – at auction.”

With bidding now open, and the live auction set for 11am PST/1pm CST March 4, this event is already considered a watershed sale by the toy collecting community.

Bidding is now open for the The DKE Toy Archive event, with the live auction scheduled to begin at 11am PST/1pm CST March 4.

Check out the full auction and bid here: 2021 March 4 DKE Toys Archive Special Online Auction 11159 * please note the fee of 25% will be added on top of the winning bid.

Heritage also enjoys the highest Online traffic and dollar volume of any auction house on earth (source: SimilarWeb and Hiscox Report). The Internet’s most popular auction-house website, ha.com , has more than 1,250,000 registered bidder-members and searchable free archives of five million past auction records with prices realized, descriptions and enlargeable photos.

DKE Toys: Dov Kelemer & Sarah Jo Marks are Co-Founders of DKE Toys which was the largest independent wholesale distributor of designer toys, limited edition art objects, collectibles, and gifts in the world exclusively representing hundreds of artists, designers, and boutique manufacturers. In 2016 the wholesale distribution arm of the business was sold to Disburst Ltd.

DKE Toys has curated dozens of art shows over the past 15 years including The Vader Project (World Tour), Let’s Eat (Giant Robot), 99 Deaths of Jar Jar (Designer Con), Spoonful of Star Wars (SDCC) and more. Currently DKE Toys shows at 3 conventions a year including their very own #DKECON in which artists from all over the world create limited edition hand made action figures.