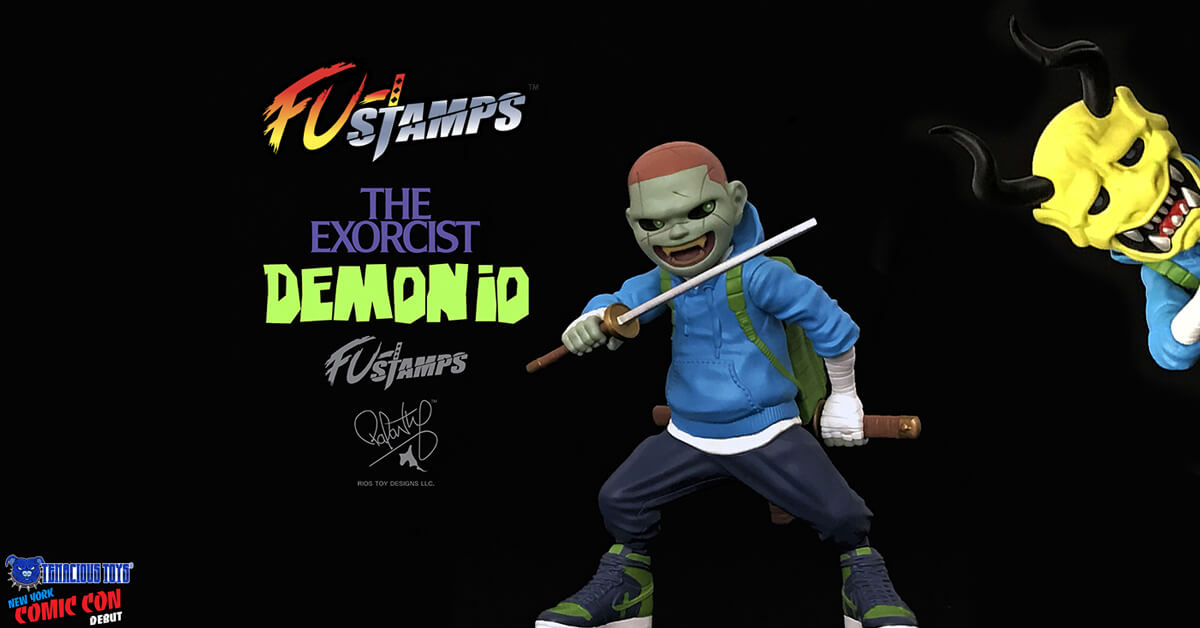 Demonio is a 7″ tall, detailed resin figure that comes with interchangeable magnetic heads: the Exorcist Demonio head, and an alternate yellow demon mask head. Demonio’s sword can be displayed in his hand or in his backpack.

“The Exorcist” edition of Demonio will be a Tenacious Toys shop exclusive which will make its debut at their NYCC booth # 780, with a simultaneous online release on their website for fans who cannot make it to NYCC.

About Demonio:
Demonio, also known as the “Dark Side Kid,” is an urban legend around the neighbourhood, however, Demonio is in fact real. He was raised in the bowels of an abandoned building deep in a forgotten section of the South Bronx. Demonio is thought of as a monster whose name is whispered in the ears of misguided children from the hood. It is said that the act of just muttering his name will ensure absolute pain and death.

Demonio sprints in silence, carrying his “Killing Gods Swords”. The only way to know if he is preying on you is by the emerging stench of sulfur and blood. Those who smell the scent of blood are doomed to realize that the blood is, in fact, their own.

Find Demonio at the Tenacious Toys NYCC booth #780 in October. There are just 50 of these figures, priced at $130 each. Fans will also get to meet and chat with creator Rios Palante, who will be on hand for most of the show. Demonio is the second character from the new comic book series “FU-Stamps” to be released in resin statue format. A sneak peeks 24-page collector issue of FU-Stamps will be available in booth 780 as well.

All leftover items from the Tenacious Toys booth, exclusive or otherwise, will become available online on the www.tenacioustoys.com NYCC 2019 page on October 5th or 6th.

Tenacious Toys (US)
www.tenacioustoys.com
WELOVETTC will get you 10% off your first order. To obtain a second 10% code, you can sign up to the Tenacious Toys email list on their website, or you can join their loyalty program which can earn you points for every $ you spend with Tenacious Toys.