The next chapter begins! from the creator who brought you Bodega Blade, comes Demonio! The blood brother to Bodega Blade both protecting the streets. Call him the local vigilante, FU-Crew has made the transition from illustration to a fully fledged resin art figure and boy, is he armed for your protection and keeping the peace on the streets. Japanese influences with the Oni mask for that moment when he needs to hide his identity!

Paying homage to one of Fu-Stamps favourite video games, Fu-Stamps will be offering a limited amount (20pc) of this Akuma colourway that is based on the iconic Demon from the Streetfighter series!

Demonio, also known as the “Dark Side Kid,” is an urban legend around the neighbourhood, however Demonio is in fact real. He was raised in the bowels of an abandoned building deep in the forgotten section of the South Bronx. Demonio is thought of as a monster who’s name is whispered in the ears of misguided children from the hood.

It is said that the act of just muttering his name, will ensure absolute pain and death. Demonio sprints in silence, carrying his “Killing Gods” Swords. The only way to know if he is preying on you, is through the emerging stench of sulfur and blood. Those that get to recognize the scent of blood, also realize that the blood is in fact, there own.

This figure is 7″ tall and is sculpted in high detail. The figure’s sword can be displayed with the sword in its backpack or in its hand. This deluxe figure also comes with an interchangeable head. You can swap out Demonio’s head with his demon mask!

The official pre-order date is Friday 12 July, 12pm EST and will cost $130 ea.” at https://fustamps.bigcartel.com/products

All designed my Rios Palate @riost_toy_designs from the upcoming @fustamps storyline created by Rios Palate. 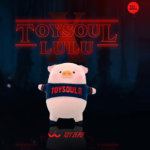