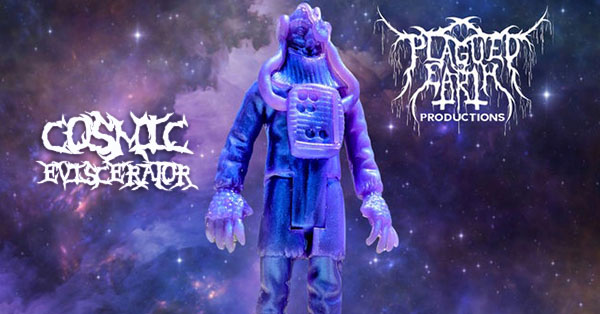 Plague Earth Productions makes distasteful adult collectibles for the diseased, the deceived and the poisoned. After the GLACIER SLIZZHUNTER (read HERE) and across the cosmos, here comes another fiend to haunt your dream. Make way for the COSMIC EVISCERATOR!

The cosmic Eviscerator, the name bestowed upon him through the thousand year grapevine of his soon to be victims and prey. The Eviscerator’s true origin and name are unknown; his legacy and reputation are based solely around what his victims could observe and relay before their imminent disembowelment.

It is fabled that The eviscerator arrives to semi developed planets during times of great tension and lies dormant 90 feet under the planets soil. After manifesting, instigating, orchestrating and executing a string of carefully planned chaotic events, the doomed planet turns upon itself under his guise , and the eviscerator emerges From his deep hibernation only to blend into the heat of war and carnage.

No one living being has ever provided a detailed report regarding exactly how the eviscerator carries out his endless executions, as battlefields riddled with thousands of men are turned to shredded sacks of skin and bone within minutes, but it is rumored that the eviscerator’s chest plate opens, creating a massive, blinding ultraviolet ray spanning miles in whatever direction it points . He rips his victims open without laying a single appendage on them and feeds on every organ in their body containing liquids. All of the organic tissue is extracted from the living being and vacuumed into the chest plate of the eviscerator, purely and simply to fuel his body, mind and motive on his endlessly objective cosmic hunt for life.

If you love all original characters and resin bootleg action figures with vintage vibes, now is the time.

Available HERE for $40 each. 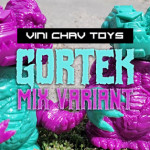 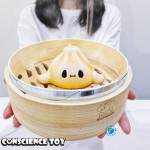