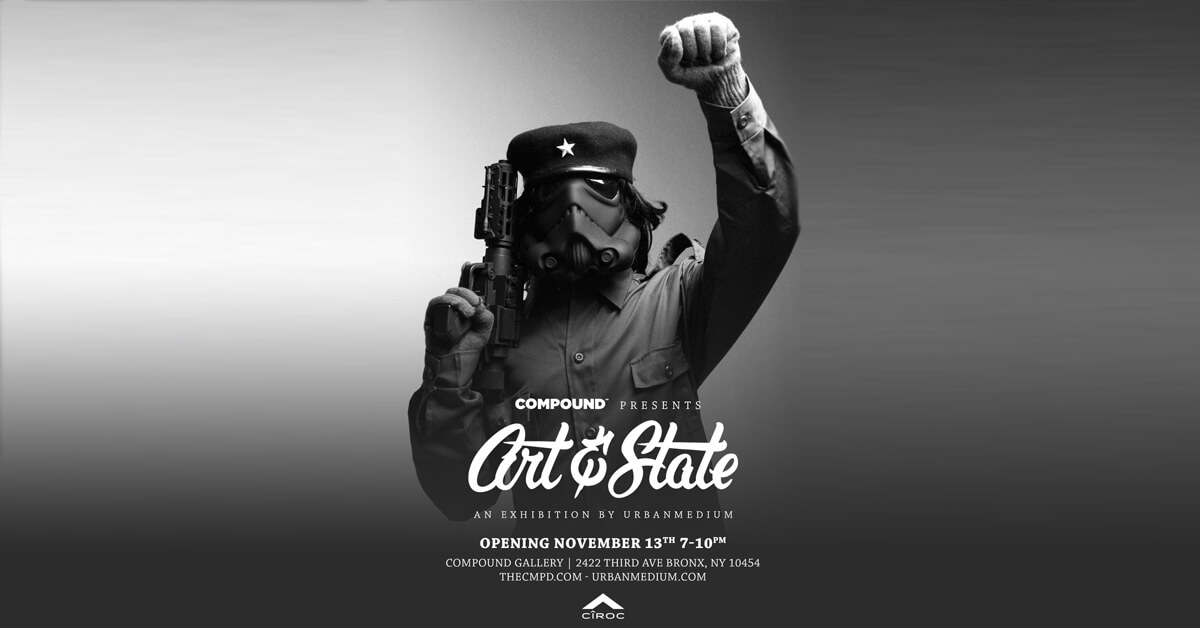 NEW YORK, NEW YORK are you ready?! BE PREPARED!–Before extending its influence on the culture to an art gallery, now one year in, Compound had been a private creative office and studio space tucked away in the same South Bronx neighbourhood. For over 11 years as an agency, Compound’s brand image developed and is easily recognized thanks to Contemporary artist, illustrator, and designer, UrbanMedium. After a short hiatus transitioning from Summer to Autumn, Compound Gallery is excited to announce, Art & State: a solo exhibition by UrbanMedium.

On Wednesday, November 13 from 7pm to 10pm, Compound Gallery invites guests to be enveloped in works by the artist responsible for illustrating the DNA of Compound. Longtime friend, collaborator, and contributor to Compound, UrbanMedium is best known for his street art, propagandist, and Star Wars-inspired works. Currently residing in Atlanta, UrbanMedium’s guerilla self-marketing campaign launched his artistic career, taking his works across the United States and internationally throughout Europe and Asia.

These illustrations are what linked the vision of Compound owner Set Free Richardson and the execution and appearance of the agency. UrbanMedium transformed the brand image of Compound creating a classic black and white illustration wheat-pasted on a 12-foot wall at the office; a staple, photo-worthy piece for celebrities and visitors.

Back in 2017, COMPOUND released limited, sold out Compound edition ‘Che Trooper’ collectable bust with UrbanMedium in Black/Gold, Black/Platinum.
Next Wednesday UrbanMedium will be live painting a limited amount of collectables; hand-signed and numbered!

The shared similarity and interest in politics and Star Wars led to a Compound collaboration with UrbanMedium’s ‘Che Trooper’ collectable bust in 2017. The limited sold out collectable was released in Compound colorways
Black/Platinum and Black/Gold. In addition to the works of all sizes and various canvases that will be exhibited in ‘Art & State’, UrbanMedium will also showcase sculptures and art busts and conduct a live painting session, hand painting a limited amount of busts that are to be numbered and signed. In addition to the exclusive busts being for sale, UrbanMedium and Compound hats, merch, and items will be available for sale throughout the length of the exhibition.

UrbanMedium’s ‘Art & State’ is set to exhibit at Compound Gallery from Wednesday November 13 7pm to 10pm through December 4, 2019. Gallery hours are Fridays and Saturdays 12pm to 5pm and from Monday through Thursday, email appointment only.