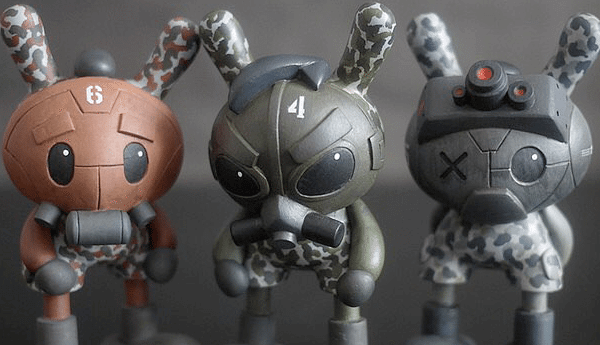 War. What is it good for? Well, when you take a look at War Child Phase 2 by Wetworks, you’ll see the answer is definitely NOT absolutely nothin’! Wetworks has taken the 3inch Kidrobot Dunny and given it a new life with his War Child series. Phase 2 is set to be released tomorrow. Wetworks has increased the size of the Dunny by an extra .5inch, with the addition of the War Child’s legs & boots. The back of each War Child is pretty impressive too. Each with a level of camo. We are also loving the glass of white wine in the background. Always a sure fire way to get a feature on The Toy Chronicle, include white wine. Also send bottles of the stuff to Gary Rozanski, care of The Toy Chronicle…. Numbers 4-6 will be available tomorrow (20th July) priced at $60/£39. You can pick up your War Child HERE but be quick though. Wetworks has already smashed out Phase 1 of War Child, which sold out within 5minutes, no surprises there then. You’ll have to have your F5 finger ready & waiting.