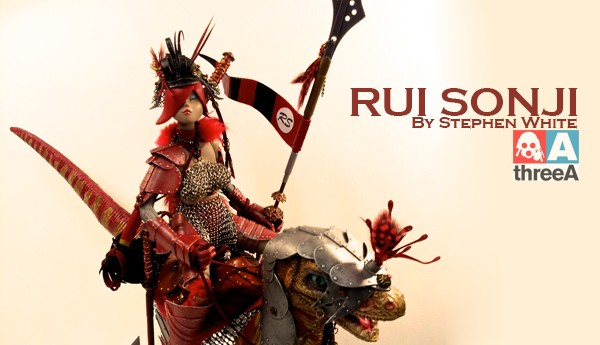 Fellow collector/ customiser Stephen White mixes ThreeA with Jurassic Park using a Princess TQ figure. In the style of Red Sonja with an added taste of Jurassic Park in the form of a velociraptor mount! RUI SONJI is her name and she has really got the velociraptor under control!

“The custom project, utilising a ThreeA Tomorrow Queen 1/6 scale figure, mainly involved the making of a partial suit of armour in styrene sheeting. Paper patterns were created for the various parts of the armour which having been traced onto styrene sheet were then cut out and warmed to allow for the curving of the pieces around the legs and arms of the figure. A cyanoacrylate glue was used to assemble the armour before it had fake rivets added followed by a grey base coat and then a red top coat of acrylic paint. Finally, dry brushing with silver metallic enamel paint was carried out to bring out the highlights of the rivets, edges and overlaps of the armour” 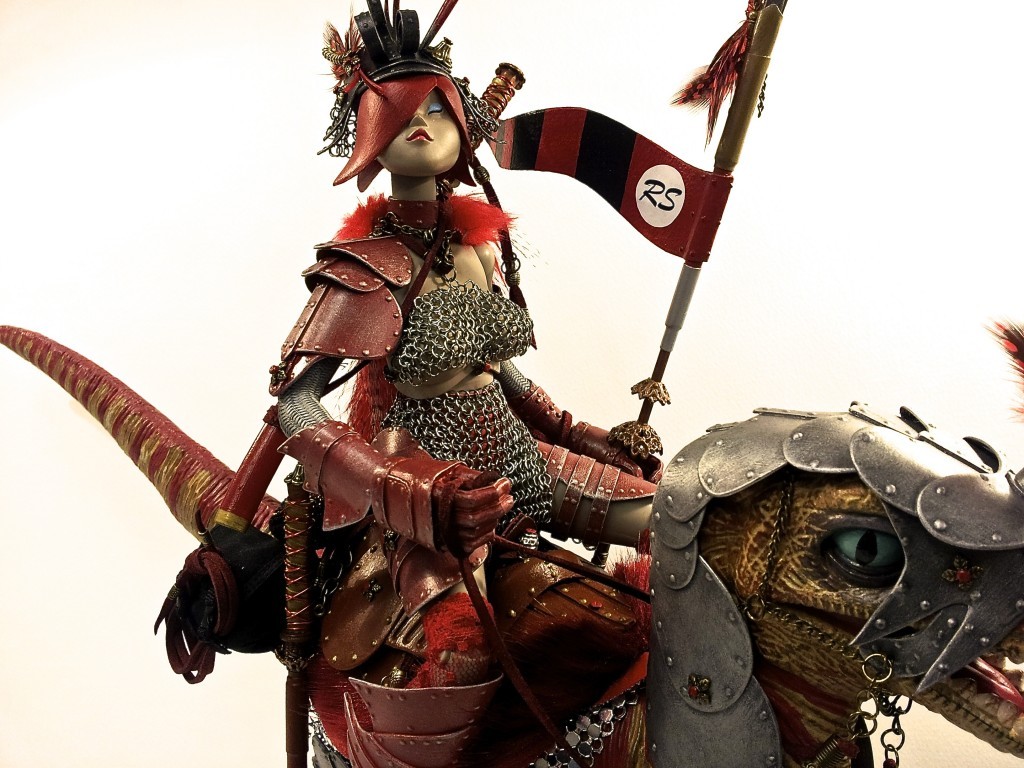 As you can see from the photos the rivets, edges and overlaps of the armour really are top notch along with the added feathers makes it more special.

The chain mail bikini top and skirt was created from the sort of mail used for butcher’s protective gloves and the final touch of the headgear was added having also been created from styrene sheet, chain mail, feathers and a couple of painted porcupine quills!
The weapons of an axe, sword and lance were scratch-built from styrene sheet, plastic tubing and stiff art paper prior to be painted with acrylics. 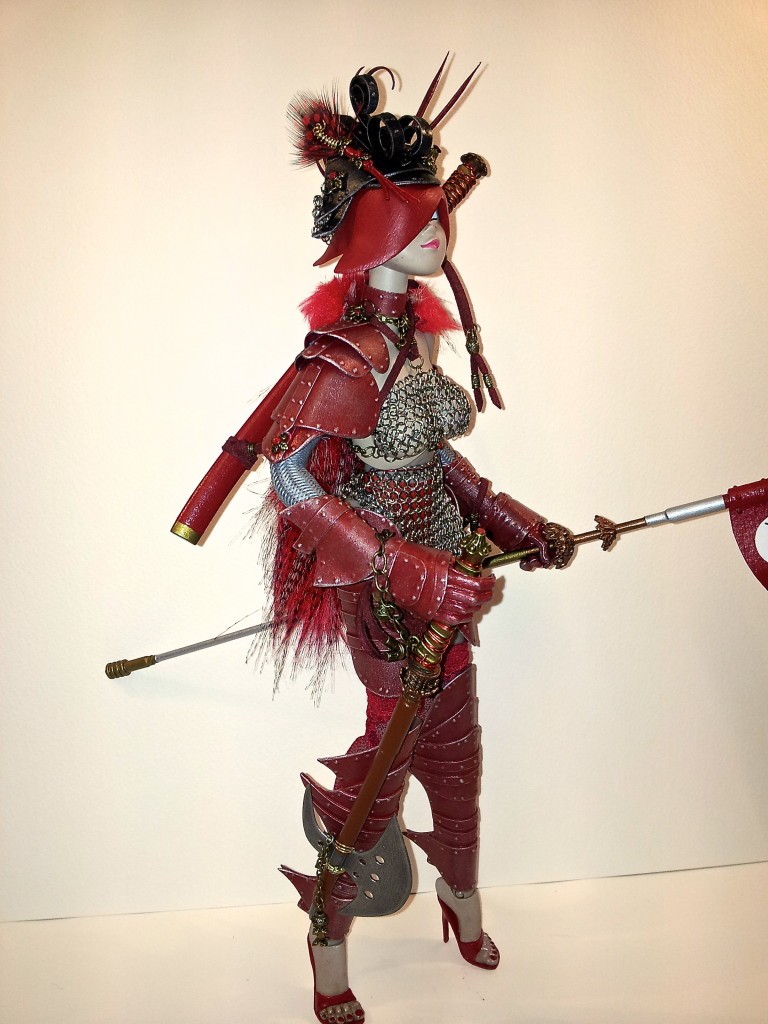 “The velociraptor is a child’s plastic toy I bought at a car boot sale for 50 pence and because this type of dinosaur is relatively short legged, I had to cut the legs through at the knees and then insert steel rods to lengthen them before covering these joints with padding tape and leg armour so that the dinosaur would eventually be of a suitable height as a mount for a 1/6 scale figure.
More armour was created for the neck and head areas of the velociraptor before the whole body was grey base-coated and then top-coated and dry brushed with acrylic paints and a satin sheen varnish.
The saddle was made from part of a re-cycled washing-up liquid container and styrene sheeting painted and mounted over fake fur and more chain mail of a different size from a secondhand ladies handbag. Leather thonging and bronze jewellery chain was used for the stirrups and bridle fittings.” 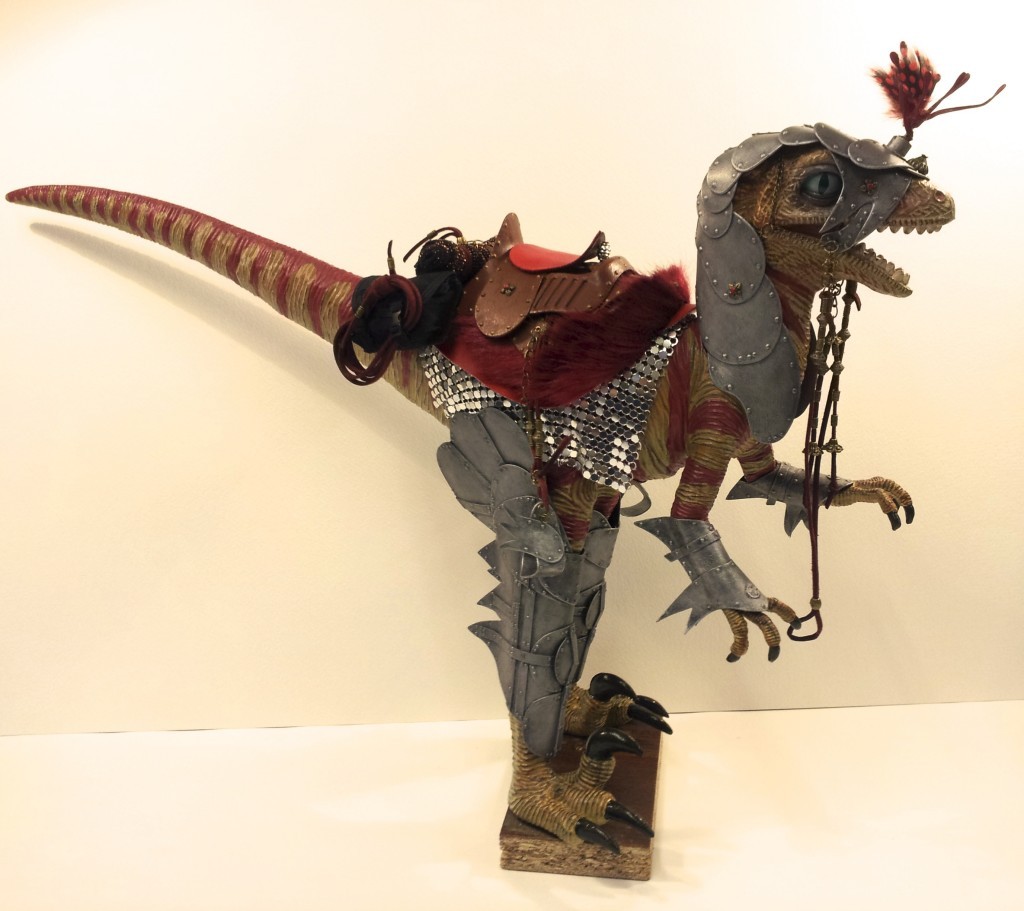 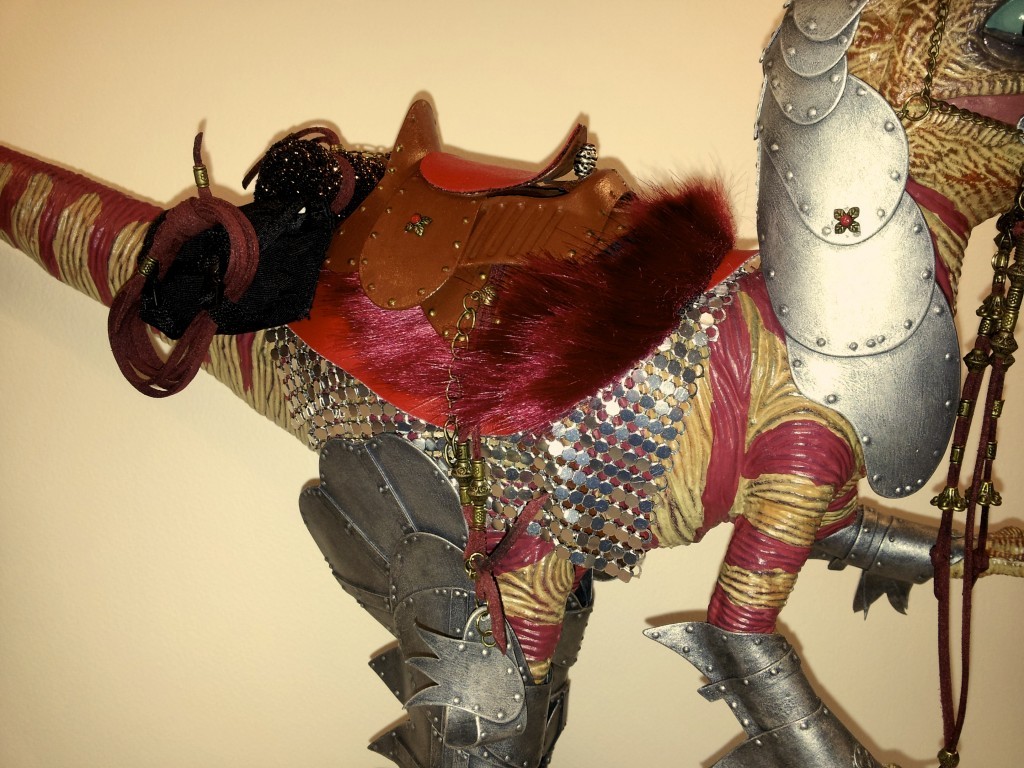 The whole project took about three weeks to complete and was a great deal of fun and I hope you all enjoy it!

We at The Toy Chronicle would like to thank Stephen for giving us an insight on how this custom was made. Now watch out for his next personal project a 1.2 metre tall steampunk style rocketship designed to be crewed by 1/12 scale Tomorrow Queens!
Need help or want a custom from Stephen then you can contact him via Facebook or drop him a EMAIL.
Here’s a little insight into Stephen.
“A retired garden designer and garden historian who also lectured in Higher Education. Having converted my garage into a workshop I have re-engaged with the hobby of my youth which was building construction kits but this time around I decided that I would not just build ‘kits’, I would design them myself.
I now mainly create robots, cyborgs and fantasy characters and the occasional machine or vehicle very often in a steampunk style utilising re-cycled plastics, styrene sheeting, jewellery findings, clock and watch parts and discarded camera, laptop and mobile phone parts”