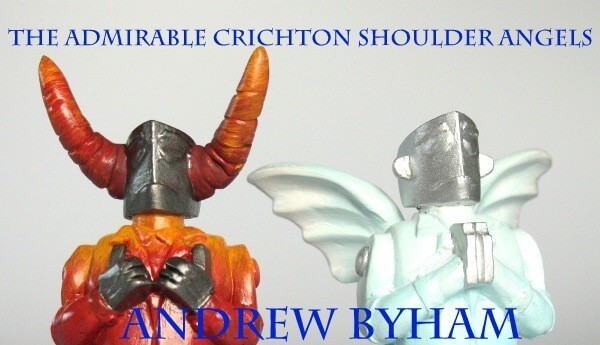 Here is a little back store for you,

The old Duke of Falcon Hall had rather too many vices that became public knowledge. However strongly urged by family and peers to amend his ways, he was rather reluctant to turn his back on his more enjoyable pastimes.

In a bid to restore at least some order to his life he installed a twin pair of Crichton Shoulder Angels. Working in tandem they advise the perfect balance of temptation and temperance in equal measures.

The old Duke’s dignity was restored. Whilst retaining a modicum of his favourite pastimes he was able to balance his public standing with moral and upstanding acts of decency.

Whilst one shoulder angel may say “Sir, might I suggest a visit to Mrs Dollymop’s ‘Coffee House’ to acquaint yourself with the young Femme Galante” on the Saturday, the other might suggest “Sir, the estate workers are running a village fete today. Perhaps you might attend and judge the homemade jam?” on the Sunday.

Patent Crichton Shoulder Angels come with a strong warning: they must never be separated. The resulting unbridled bad behaviour or runaway pious goodness is not worth the risk. This pair of customs are made using Andrew’s existing Admirable Crichton resin models, then they are customised with polymer clay and handpainted in Acrylic.
These come as a pair priced at £40 + P&P. Separating them is far too dangerous to consider, so head over to http://theadmirablecrichton.bigcartel.com/product/crichton-shoulder-angels to grab a set.