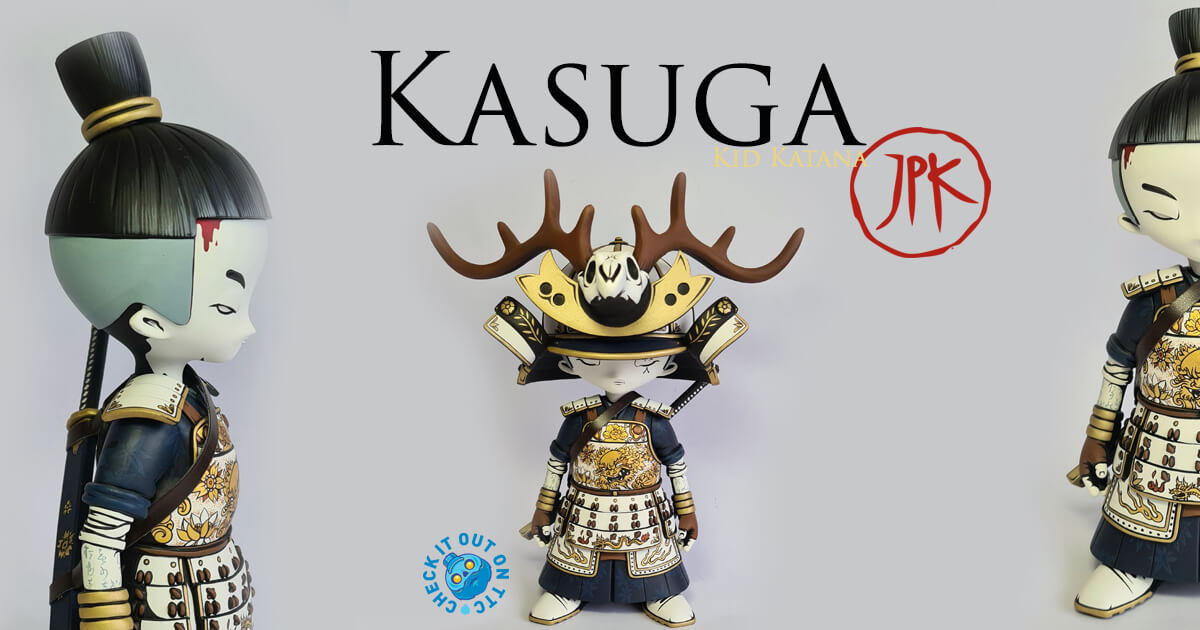 The sound of Jon Paul Kaiser x 2petalrose makes collectors weak at the knees and JPK has just shown what could happen if the two join forces and make production. One more prime example is this custom one of a kind Kid Katana! using the beautiful original resin figure by 2PetalRose. He’s called Kasuga Kid Katana.

His story is that he was a samurai in Nara, sworn to protect the small city. The city was sacked by a ruthless neighbouring warlord and the samurai were left masterless. Instead of seppuku, the samurai sought out glorious death in battle. At first, he hunted the soldiers left to guard the town, one by one they fell to his blade. Once the town was emptied he sent word to the warlord that the town was no longer his and challenged him to a duel. Knowing this dishonourable bandit King would not fight fairly, he donned his most regal armour. Took up the sword of his ancestor and drew death poetry upon his arms and body. Clad in this spiritual armour he strode out to meet death and glory.

JPK went as far as giving the helmet some extra sculpt! one thing that bugs us is that shodō But doesn’t take away the fact Kasuga Kid Katana ROCKS! Look at all the fine detail and all JPK signature shadowing.

Not available to purchase unless you have to fight for it in Kevin Lloyd‘s collection. Looking for a commission from JPK? He’s just opened up 1 spot on his list! message on his Instagram HERE or Facebook HERE to get onto his commission list.