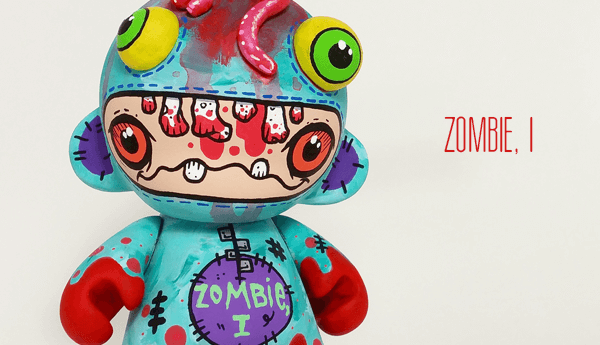 The Other Guy loves Zombies, and to be fair, who doesn’t? Zombies are all the rage right now. The streets of the world will be awash with zombies tonight, as folk enjoy the Halloween festivities. So The Other Guy decided to spook you all, with his latest custom on this Halloween night. We love the vivid use of big bold colours by The Other Guy on Zombie, I. The axe to the skull is a nice addition to Zombie, I. ‘Zombie, I’ started life as a Kidrobot Munny, standing at 4inches tall (although with the axe addition, this custom is a little taller). ‘Zombie, I’ is now available to purchase today for $95/£62 from The Other Guy’s webstore HERE.

The Other Guy also has another fellow all set for his Halloween night out. Meet Logan. Logan loves the Creature from the Black Lagoon, so this fine evening he has made his own Black Lagoon creature.