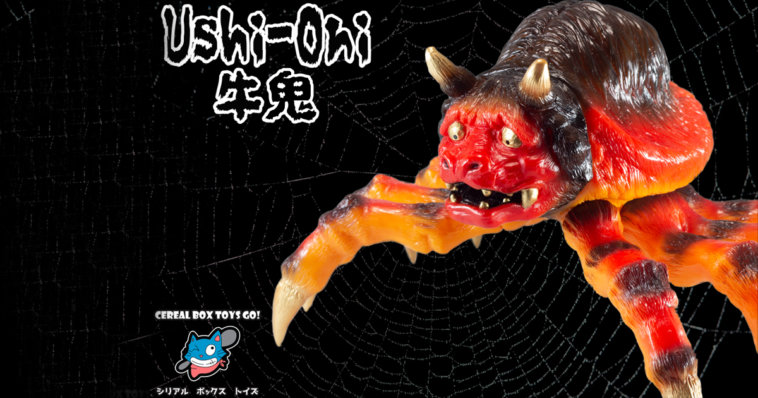 Next level of Arachnophobia is coming! The Canada based guys Thomas & Franco Ferrara at “Cereal Box Toys Go” unleash these freaky sofubi, Ushi-Oni, the bull demon and Ogre made a debut at DesignerCon but now its time to release them all into the wild as a part of yokai series!

A mysterious new yokai has been spotted skittering through the halls of The Wandering Castle. Conflicting reports shroud the monsters true appearance. Some say it possesses the face of a bull, while others report a human skull within a mass of twisted legs. Fond of water, Ushi-Oni frequents the many hot springs found in the castle’s depths. The “Demon Silk “it spins from the skull on its abdomen is prized for its strength and luster, but the beast’s toxic saliva makes it exceptionally dangerous to harvest. Its eight powerful legs are tipped with sharp talons, each sturdy enough to allow Ushi-Oni to leap and land with threatening poise, both in water and within its own webs. Despite the bulky appearance of its shaggy body, the grace and deftness of this lumbering monster are astounding.

An egg sac was recently discovered in the lower levels of the wandering castle. While under observation the eggs began to hatch, releasing a new brood of Ushi-Oni. Despite the efforts of expert handlers the spiderlings escaped and now roam freely through the world. Through great effort, we have recaptured a number of these yokai and present them to you for your consideration. Please be careful as even these small Ushi-Oni may grow to become gigantic beasts.

Friday, December 6th, Cereal Box Toys Go will be opening online store at 3pm EST https://cerealboxtoys.storenvy.com/ The figure is made in Japan and soft vinyl.

Red Ogre and Blue Ogre Ushi-Oni available for 80 USD each. Only 8 of each colourway available. But that’s not all! a small number of Orange, Purple and GID blanks available for 75 USD to celebrate the premiere of Ushi-Oni.