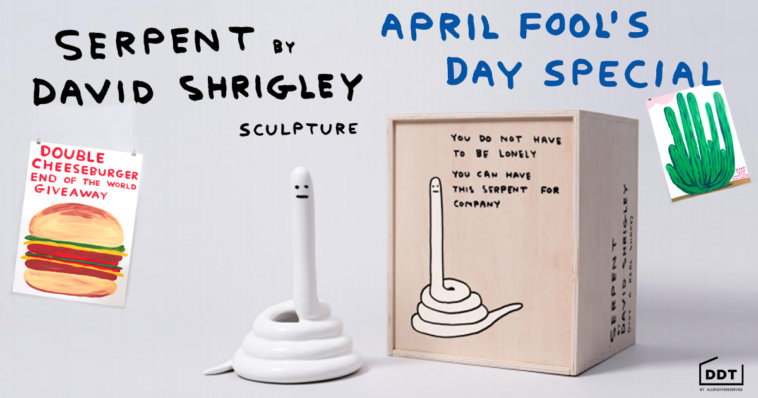 Next artist to be added to the AllRightsReserved MEET____PROJECT roster is one of our very own UK based artist David Shrigley! Presenting the artist’s “End-of-the-World” advice on April Fool’s Day/ As the cancellation of prime art fairs and events worldwide builds up a depressing atmosphere of stress and despair,《MEET PROJECT》by AllRightsReserved introduces David’s latest artworks filled with his universally accessible humour via a globally accessible online platform.

Widely known for his satirical sculpture《Swan Thing》, David will launch his brand-new sculpture 《SERPENT by David Shrigley》,  the 24cm-tall ceramic sculpture, as well as two new original silkscreen prints, countering loneliness with his “End-of-the-World” humour on the April Fool’s Day.

The 3rd 《 MEET PROJECT 》 by AllRightsReserved presents the humour of celebrated contemporary British artist David Shrigley on his favourite day of the year — upcoming April Fool’s Day. As the cancellation of prime art fairs and events worldwide builds up a depressing atmosphere of stress and despair,
《MEET PROJECT》by AllRightsReserved introduces David’s latest artworks filled with his universally accessible humour via a globally accessible online platform.《MEET David Shrigley’s April Fool PROJECT》reaches out to art lovers across borders, countering loneliness with his “End-of-the-World” humour on the April Fool’s Day.

《MEET David Shrigley’s April Fool PROJECT》releasing on April 1st
Presenting artworks of “End-of-the-World” advice to combat anxiety and loneliness
David Shrigley, one of the UK’s most loved & respected artists, is known for his crude but hilarious tragicomic doodles,
sculptures and anecdotes that depict the world as an absurd place. Having received an OBE for his contributions to
the visual arts, David works across a wide range of artistic media and scale, from the humongous sculpture “Really
Good” (2016) exhibited in London’s Trafalgar Square to quirky gadgets such as as the “Ridiculous Inflatable Swan-thing” floatie. The project features his new sculpture 《SERPENT》 as well as two new original silkscreen prints. SERPENT by David Shrigley》a companion sculpture to counter loneliness Widely known for his satirical sculpture《Swan Thing》

David will launch his brand-new sculpture 《SERPENT by David Shrigley》, prolonging the hilarity through《MEET David Shrigley’s April Fool PROJECT》. The 24cm-tall ceramic sculpture depicting a ridiculous erect serpent with a cartoonish smile is intended as a companion to counter loneliness. “In many cultures, the snake is seen as representing wickedness or dishonesty. However, this snake represents truth and positivity. Everyone who has this serpent in their home will experience joy and will find that their attitude towards life becomes more positive,” David explains.

The serial-numbered sculpture will be released globally on DDT Store in a limited edition of 250pcs. Priced at USD $550 | HKD $4,290 with the artist’s signature on the authentication card. Shipping from early May, 2020

New Mischievous Original Silkscreen Prints offer advice for the End of the World
David’s print《Double Cheeseburger End Of The World Giveaway》offers a helpful suggestion in times of difficulty. “Thankfully, the end of the world is still a long way off. But when it does arrive, the disappointment might be offset by giving everyone free cheeseburgers,” says David. Another piece of advice is offered “as an artist and responsible citizen“ in his print《Keep Your Ass Away From The Cactus》: “It is most certainly not a good idea for your bare
behind to touch the cactus. You can trust me on this: I have experience of cacti”. Both pieces are signed by the artist and priced at USD$800 | HKD $6,240, to be released in a limited edition of 125pcs. Shipping from early May, 2020.

About David Shrigley
David Shrigley OBE was born in 1968 and grew up in Leicester, UK. He studied at Glasgow School of Art from 1988-91. He lived in Glasgow until 2015. He now lives in Branscombe and Brighton. His work encompasses many media including drawing, painting, sculpture, animation, performance and music and has been exhibited in many different countries. His drawings have appeared in numerous newspapers and magazines, and he is the author of over 30 graphic books. In 2012 he had a retrospective exhibition at Hayward Gallery in London. He is the recipient of several honours. In 2013 he was both shortlisted for the Turner Prize and awarded the 2016 Fourth Plinth commission for Trafalgar Square. He was awarded OBE, an official British honour presented by the Queen, for his contribution to the Visual Arts sector in 2020.

About MEET___PROJECT by AllRightsReserved
A new project where culture and community MEET. From the team that activated numerous monumental public installations across Asia (such as the Yellow Rubber Duck to Hong Kong’s Victoria Harbour) comes another new initiative “MEET___PROJECT” that will launch in November 2019. At “MEET___PROJECT”, artists and creatives from all over the world will find an innovative platform that
will allow them to expand and express their creative vision to other mediums that were previously unexplored – installations, sculptures, video art, digital technology, and more.

Following the success in engaging the online community with DING DONG Takuhaibin, also known as DDT Store, an online marketplace for special limited edition products designed by world-renowned contemporary artists, “MEET___PROJECT” is an extension and formalization of creative projects that will
stretch the imagination and expectations. 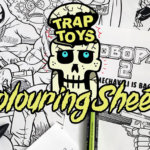 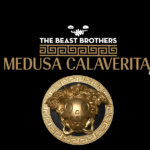